Jump to the following on this page:

The U.S. Department of Defense (DOD) is the second largest sector in North Carolina’s economy, with an annual economic impact of $48 million. As wind energy continues to grow in North Carolina, some have raised questions about whether wind projects can coexist with military operations. However, these concerns are not based on facts.

Existing state law in North Carolina and federal law requires the Base Commander at major military installations to be consulted with during the development process of all wind energy projects. Furthermore, the DOD has a very strict permitting and approval process for any tall structures, such as wind projects, as part of its Sitting Clearinghouse to ensure there is no conflict with any military operations.

Furthermore, U.S. Department of Defense spokesperson Eric D. Badger, Maj, USAF, addressed questions from several legislators in early 2017 who incorrectly claimed that the operation of North Carolina’s first wind farm, Amazon US East, would negatively impact a particular radar installation in Virginia (“ROTHR”), stating: “The Department of Defense has concluded that the project, with site-specific stipulations defined in a written mitigation agreement between the developer and the DoD, is not expected to create an adverse impact on DoD’s readiness and operations. Recent studies have concluded that the project as currently scoped (104 turbines, compared to 158 in a prior proposal) will not degrade the ROTHR operation.”

Communities where wind farms are prevalent often wonder if the sector does more harm than good, destroying our wildlife, rather than protecting it. However, in North Carolina, there are a plethora of local and environmental permits that must be obtained during the developers permitting process to mitigate these risks. For example, the Amazon wind project passed a rigorous vetting process during the permitting phase, including a thorough review of wildlife safeguards.

According to the September 2014 report, “A Comprehensive Analysis of Small-Passerine Fatalities from Collision with Turbines at Wind Energy Facilities,” of the more than 5 billion small passerines (perching birds or songbirds) in North America, less than 0.01%, collide annually with wind turbines. The authors of the study estimate that all bird fatalities from wind turbines range from 214,000 to 368,000 annually–a small fraction compared with the estimated 6.8 million fatalities from collisions with cell and radio towers, 1.4 to 3.7 billion fatalities from cats, and of the many other, much larger threats that birds face today.

Last year, NCSEA fought off many attacks on North Carolina's Renewable Energy & Energy Efficiency Portfolio Standard, or REPS, and we believe we will face these same challenges this year. Passed in 2007 with overwhelming support, Senate Bill 3 created North Carolina’s REPS to promote the development of clean energy resources in our state by requiring electric utilities to meet a portion of their electricity sales with renewable energy and energy efficiency. Despite attempts by opponents to repeal the REPS law in recent years, a strong bipartisan group of legislators have voted numerous times to maintain the REPS, which has been a driving force behind North Carolina's $6.4 billion clean energy industry and its 34,000+ jobs. All of this has contributed to much-needed investments found in every region of the Tar Heel state.

North Carolina is now number two in the nation for installed solar capacity. As solar energy continues to grow throughout the state, so have concerns and misinformation. Recently. NCSEA staff have noted a significant uptick in local units of government at the county and municipal levels that are moving to ban or restrict solar development. Currituck County is one of the latest counties in the state to ban utility-scale solar development. (You can read our statement on the Currituck County ban here.) NCSEA staff are monitoring these developments and are working to refute misinformation and educate decision-makers.

Do you live or work in any of the following counties? Your local government needs to hear why you support solar development. You can find your "why" here.

Since agriculture plays such a significant part in North Carolina's economy, preserving our agricultural land and heritage is a priority consideration when planning for clean energy infrastructure.  NCSEA has been collaborating with the NC Department of Agriculture & Consumer Services (NC DA&CS) to determine the land use impacts of utility-scale solar installations on North Carolina’s agricultural lands and to dispel any myths.

Use of aerial photography and GIS software allowed for a determination that as of December 2016, solar installations occupy approximately 9,000 acres of former agricultural lands or 0.2% of North Carolina’s 4.75 million acres of total cropland. Click on the Useful Resources tab below to read our complete findings.

Check this page regularly for more ways to take action.

Everyone benefits along the path to a resilient, affordable clean energy future. Those benefits come in many different packages, from economic to health-related. Learn more about the six ways North Carolina is better off with clean energy here. 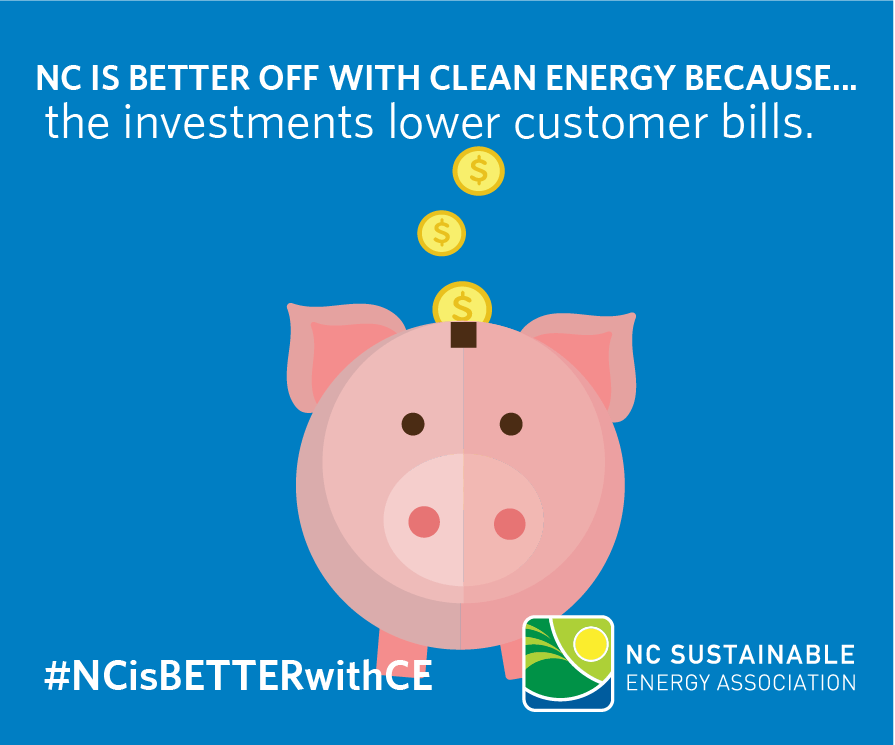 Facebook: Clean energy policies, like the REPS, make up less than $1 on most customers’ average $100+ monthly bill. Even including this charge, NC customers saved approx. $8 on their 2014 electric bills. And these charges are also keeping our future bills down: a 2015 report estimates $651M saved by 2029, thanks to clean energy’s presence in our energy mix.

Twitter: Increased #cleanenergy adoption and investments among the business community lowers all of our power bills. via @nccleanenergy 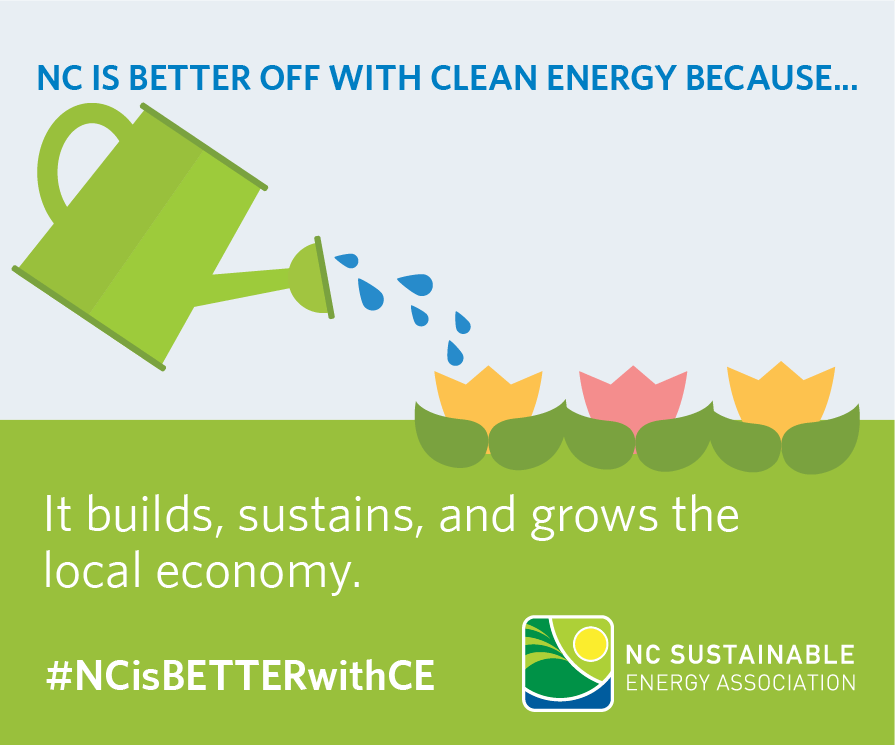 Twitter: In 2016, #cleanenergy accounted for over 34K jobs in North Carolina. 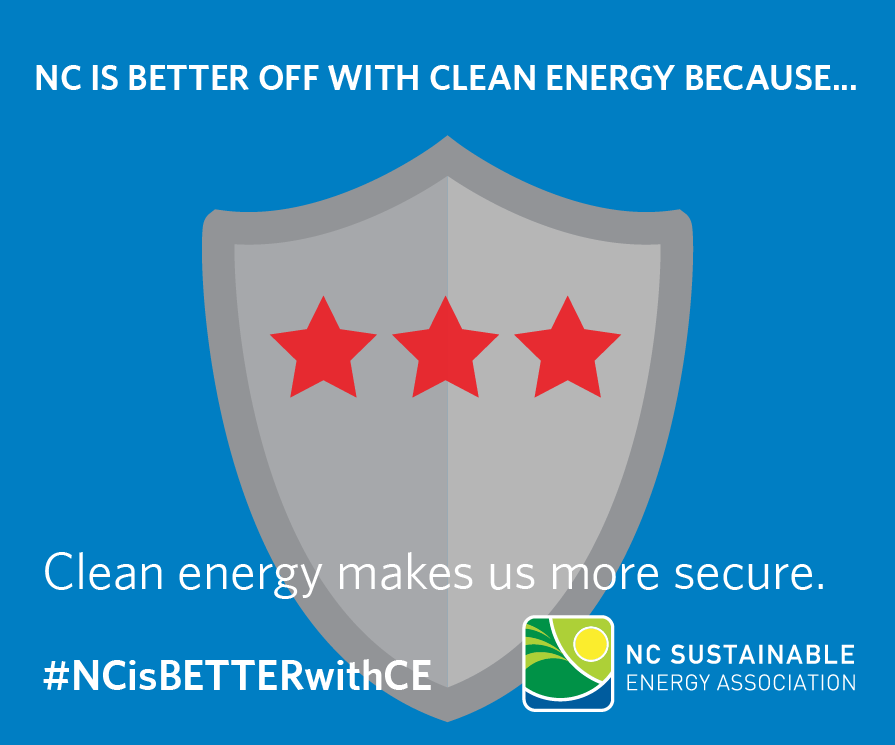 Facebook: Clean energy can help both the military and our first responders, like firefighters, stay operational during emergencies that interrupt the rest of the grid. 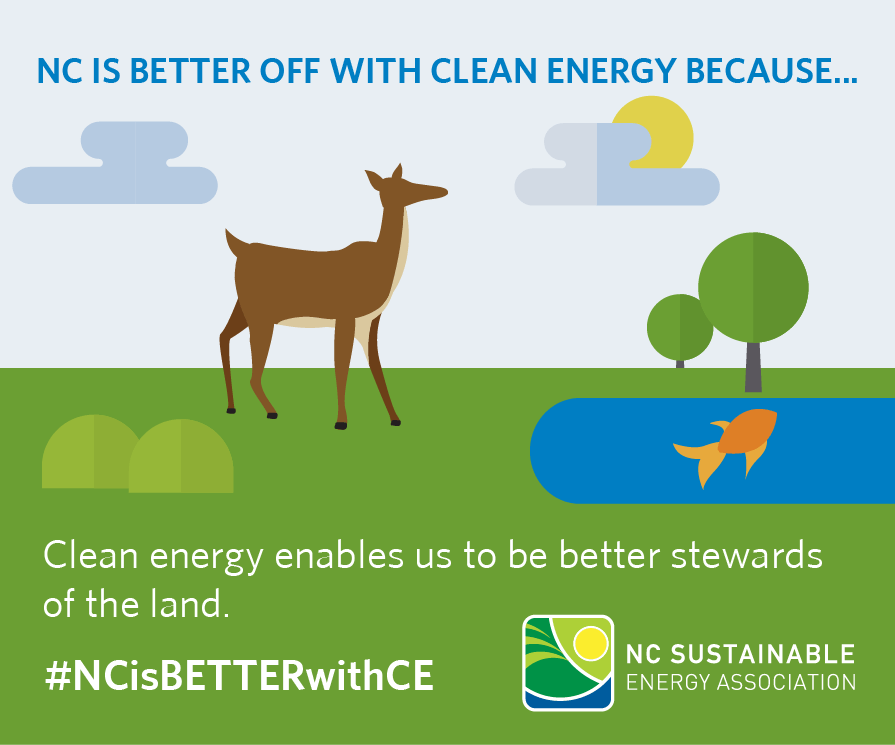 Clean energy enables us to be better stewards of the land

Facebook: Clean energy is a natural response to the moral call of many religions to care for the earth we’ve been given

Twitter: When tended to and cared for, our land is better positioned to serve future generations well. via @nccleanenergy 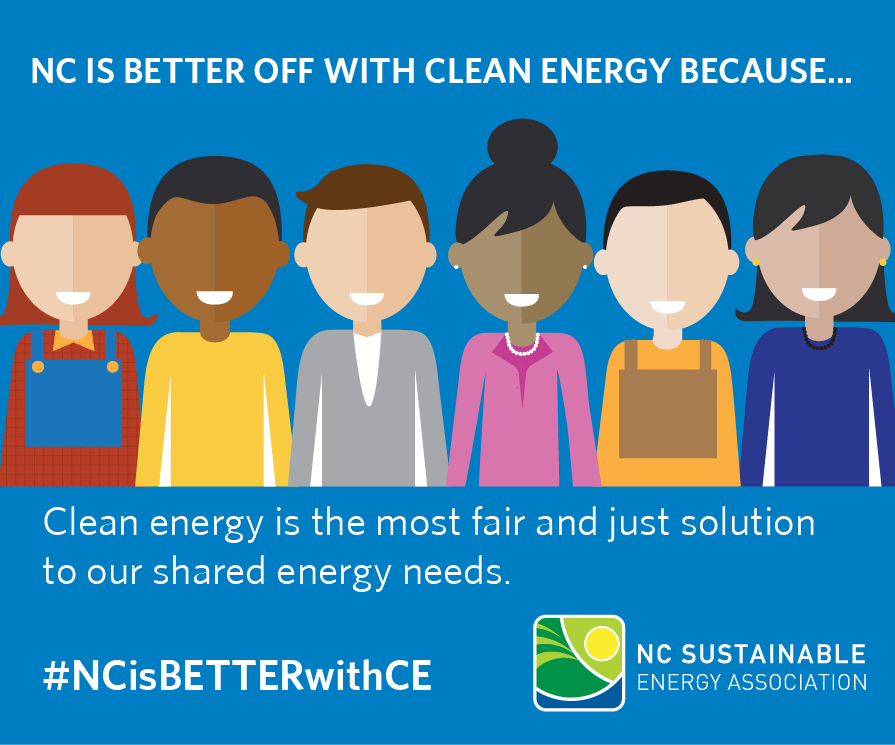 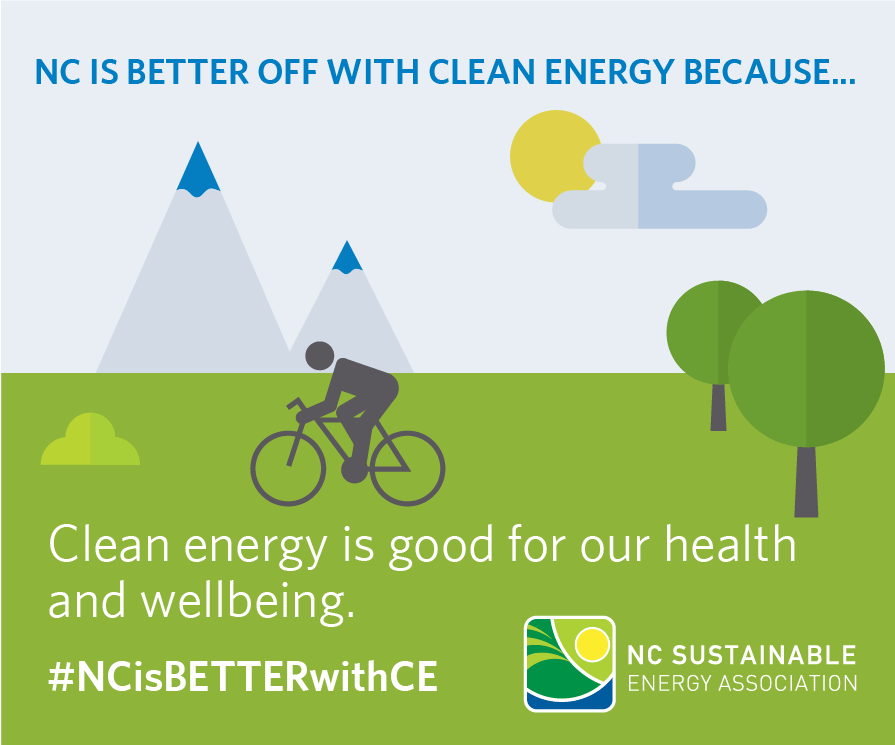 Clean energy is good for our health and wellbeing 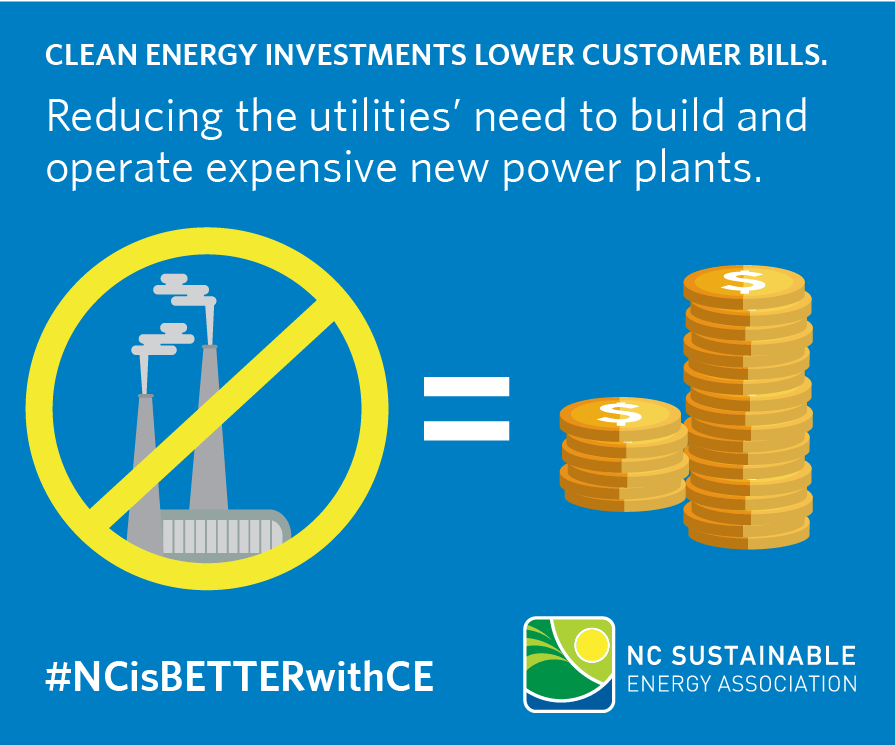 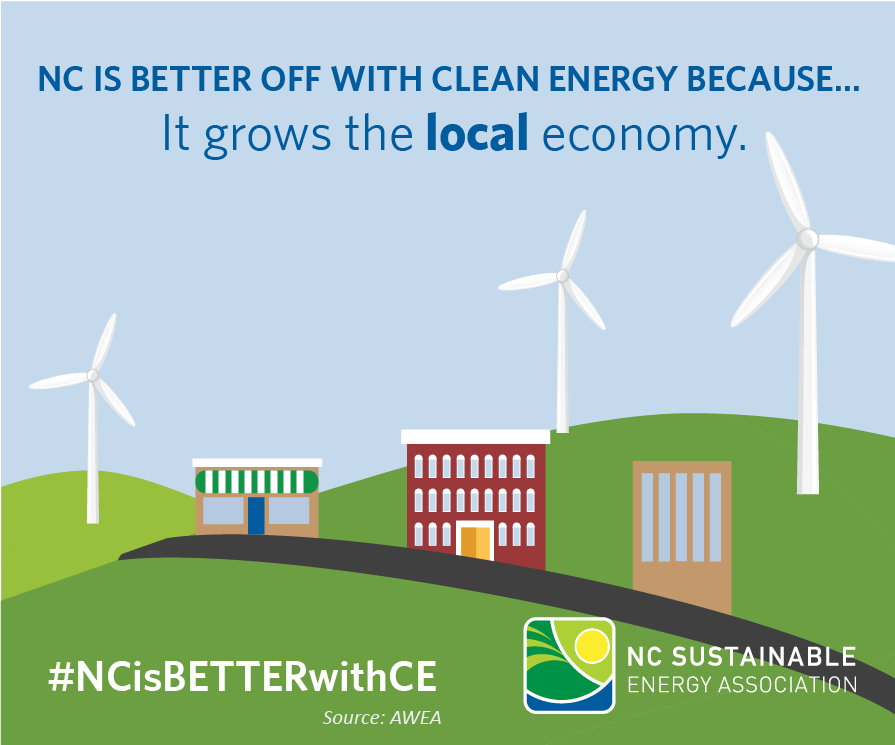 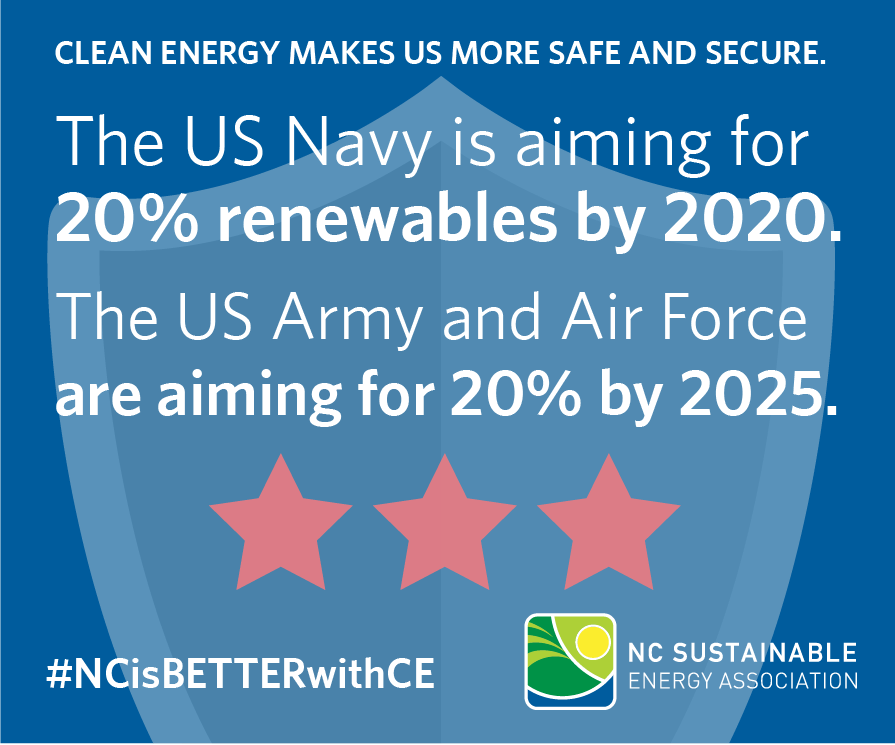 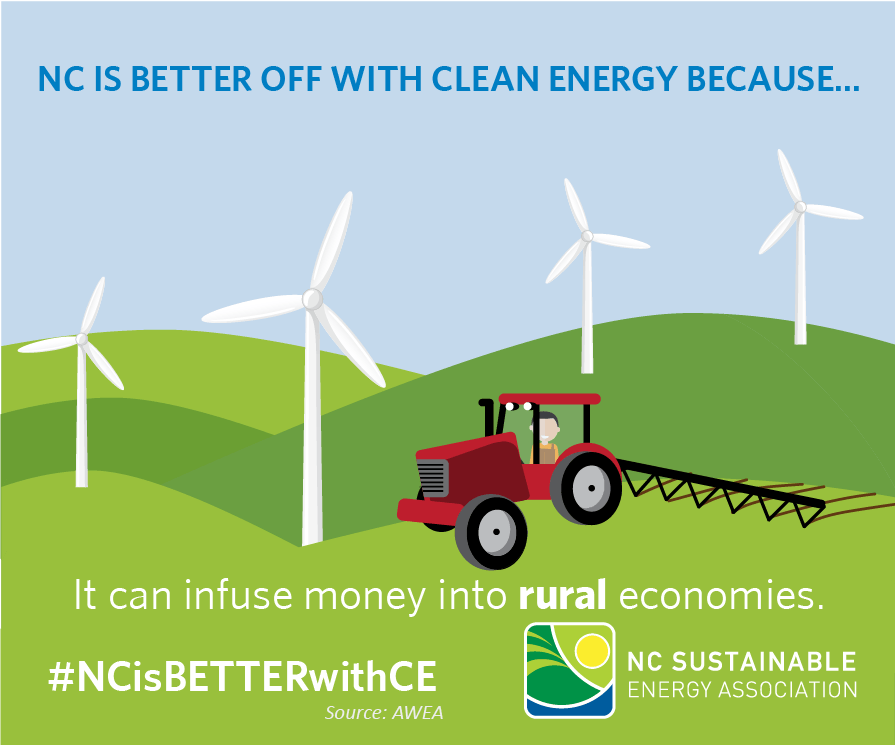 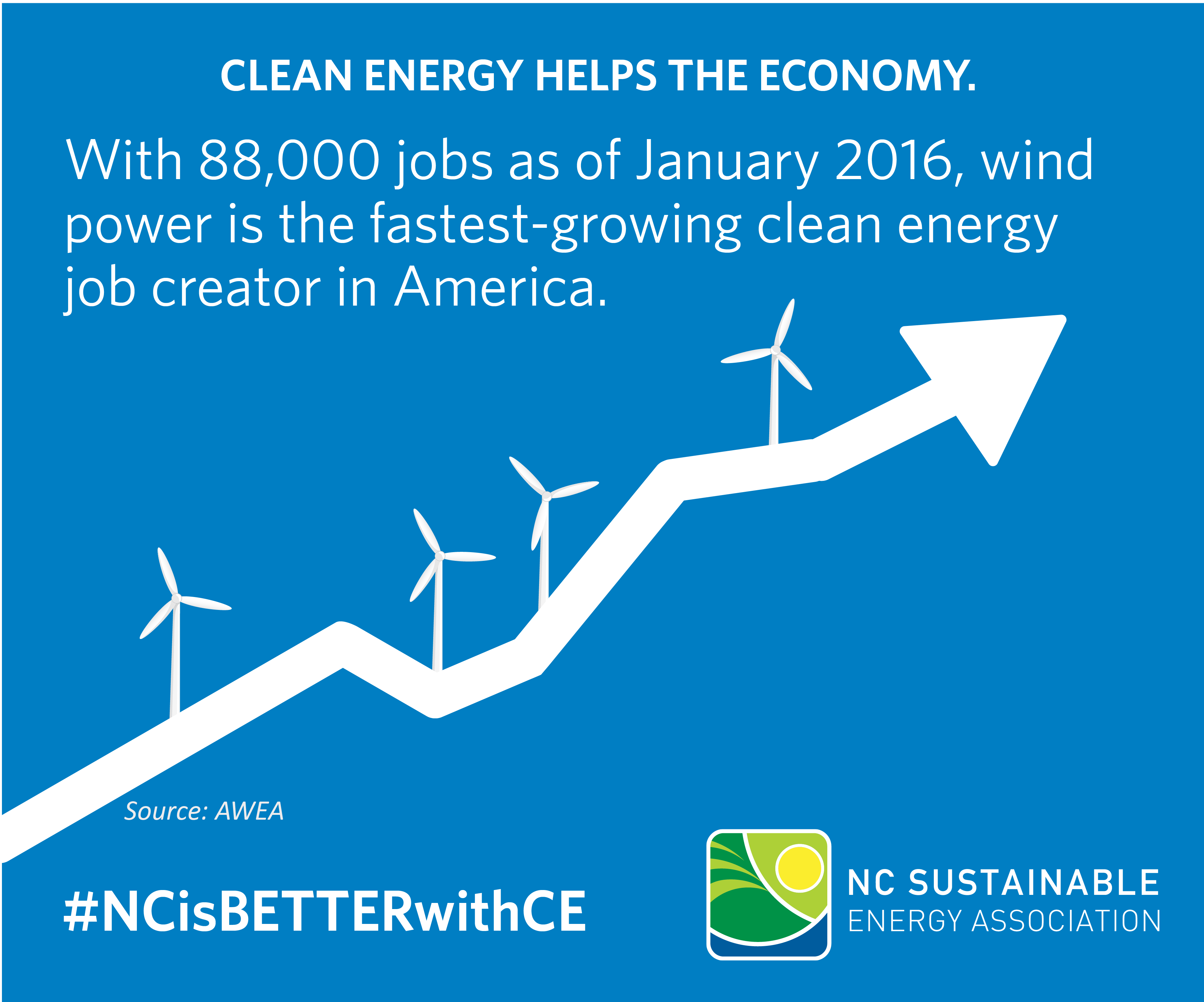 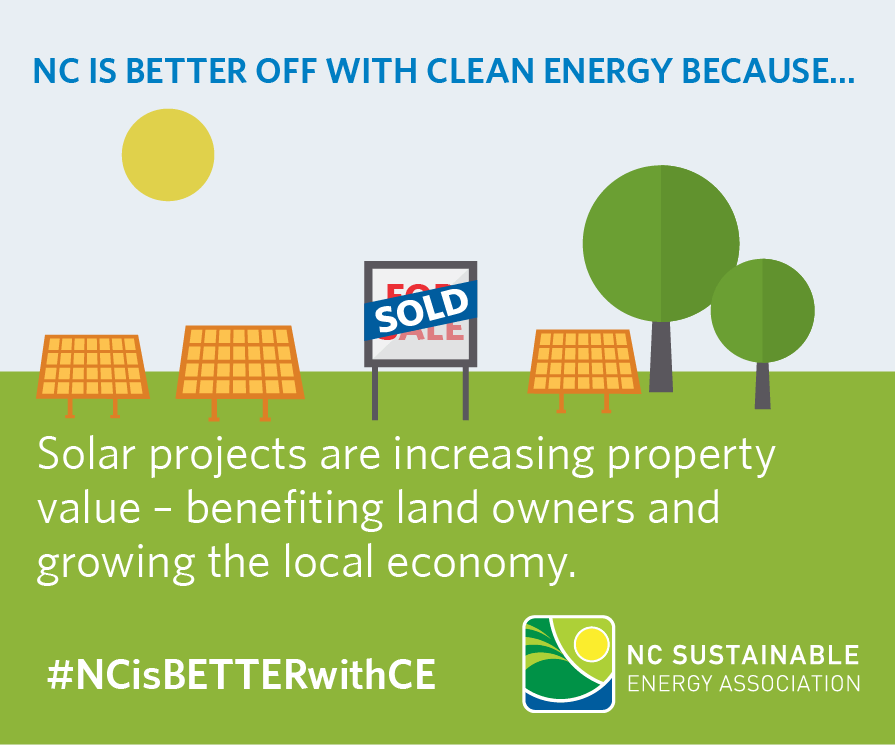 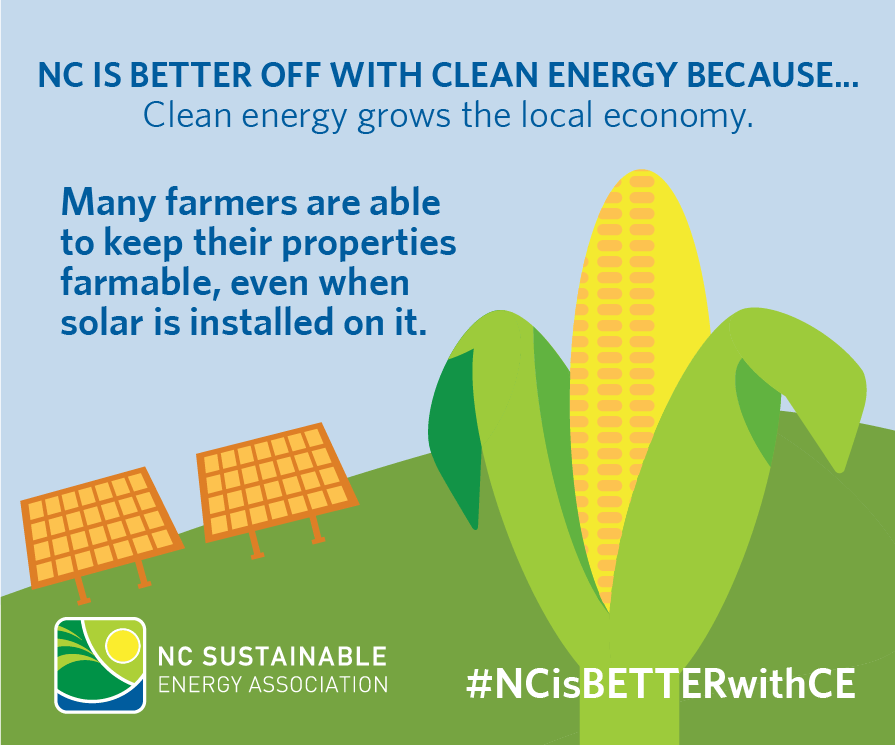 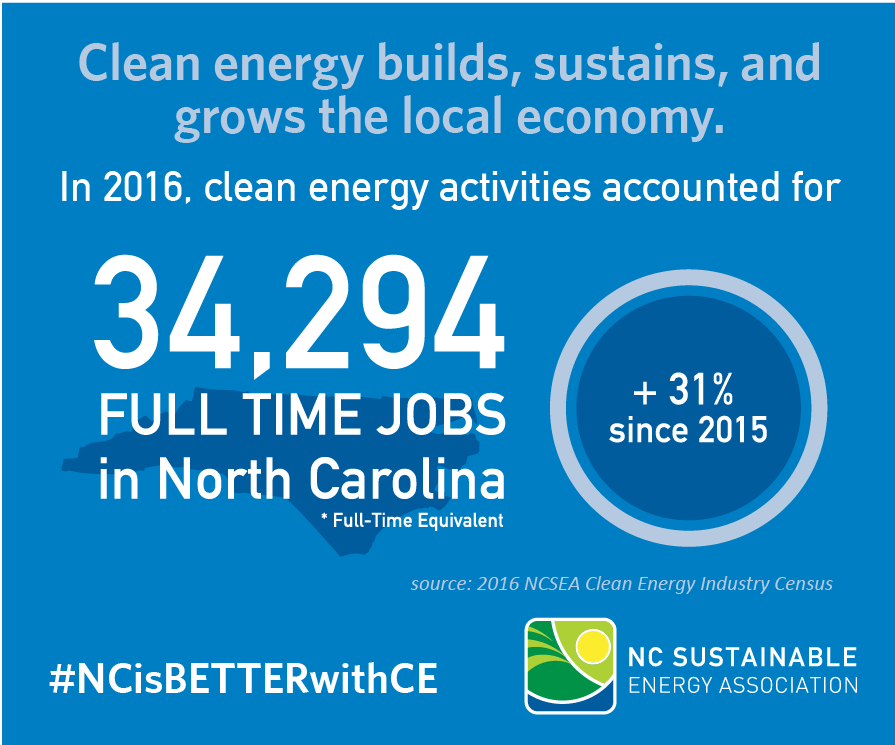 Isn’t it true that all clean energy jobs are just temporary? Expand

From renewables to energy efficiency, clean energy offers a variety of employment opportunities for our state. North Carolina is home to more than 34,000 full-time equivalent clean energy jobs, which has been increasing in recent years. What’s more, those who might struggle to find temporary work in rural areas now have more access to good paying jobs, such as those in solar farm construction and operation.

Isn’t clean energy an unnecessary and costly investment for NC, which is home to some of the lowest electric rates in the Southeast, and there is cheap natural gas? Expand

North Carolina continues to operate under a monopoly energy market. The introduction of clean energy into our limited market has been vital in keeping our rates lower than they would be with only traditional energy sources powering our homes and businesses. Many renewable sources are now approaching cost parity with conventional and unconventional natural gas. The price of solar generation is now cheaper. And these prices are projected to continue falling. This is just one reason why homeowners, businesses, and utilities across the country are getting on board with renewables – and quickly. Add in the fact that fuel prices, unlike solar and wind, can fluctuate in price at a moment’s notice, clean energy is a no-brainer. Continuing to nurture our growing clean energy economy is crucial for our effort to keep rates down in the long-term.

Clean energy investments are a hedge against variable fuel costs – which could rise again at a moment’s notice. Because clean energy sources like solar and energy efficiency technologies don’t rely on fuel, there is much more price certainty. Clean energy generation increases state energy resiliency and security as more energy is produced inside the state and does not need to be imported from other states or countries. Bonus: unlike traditional, fossil-fuel powered sources, the price of renewables continues to decrease – even as the technology improves.

I read a study that says NC REPS is going to cause energy prices to increase 42% by 2020! Is this true? Expand

This number comes from a study done by the CIVITAS Institute and contains several flaws. The report fails to take cost caps into consideration, overestimates levelized costs of energy for solar and wind, and exaggerates the amount of new generation needed to satisfy future REPS requirements. A more detailed account can be found here. Additionally, an analysis by RTI International and ScottMadden found concluded that REPS will save ratepayers $651 million by 2029.

Do tax credits for installing clean energy only benefit the rich? Expand

Clean energy policies like the now-expired NC Renewable Energy Investment Tax Credit (REITC), and federal Investment Tax Credit, have benefited all electric ratepayers in North Carolina – not just those who’ve taken advantage of credits to finance their projects. In fact, as of 2016 these investments across many rural and underserved communities statewide returned $1.64 for every $1 of REITC incentive to the local economy.

Can wind energy exist with the military? Expand

Yes, it can! Existing state law in N.C. and federal law requires the Base Commander at major military installations to be consulted on all wind energy projects. In addition, the U.S. Department of Defense has a very strict permitting process for any wind project that must be followed. Federal law requires military leaders must review and approve wind energy projects before they can be built. The North Carolina General Assembly enacted an 18-month moratorium on wind energy permitting to review potential issues with future wind development, including impact on military activities. The moratorium will conclude on December 31, 2018 contingent on additional restrictions from the 2018 session.

Why do I have a fee on my electric bill for renewable energy? Expand

Clean energy policies, like the Renewable Energy and Energy Efficiency Portfolio Standard (REPS), make up less than $1 on most customers’ average $100+ monthly bill. Taking into account this REPS charge, North Carolina customers saved approximately $8 on their 2014 electric bills. And these charges are also keeping our future bills down: a 2015 report estimates $651 million will be saved by 2029, thanks to clean energy’s presence in our energy mix.

What are my options for supporting or owning solar energy generation in North Carolina? Expand

There are many options for owning, purchasing, or supporting solar generation in the state. Check out NCSEA’s Consumer Guide on Customer-Owned Solar PV for more information on the options for owning solar PV. If owning solar PV doesn’t fit your needs, community solar may be a great alternative. Depending on the community solar facility organization, multiple community members can obtain financial benefit and/or power from a subscription, or own a portion of the system. Find out more about this option on NCSEA’s Community Solar page. Many electricity providers also offer renewable energy options through your current bill. Ask your electricity provider what renewable energy options are available.

This is a common misconception. Although North Carolina is second in the nation for installed solar capacity, solar farms here occupy just 0.2% of total North Carolina cropland. And the Amazon East Wind Farm’s 104 turbines will occupy less than 208 acres.

Will I still be able to farm my land if it has clean energy installed on it? Expand

Good news – many farmers and land-owners can keep their properties farmable, even when there is clean energy like solar installed on it. By leasing a portion of land for solar, landowners gain a steady stream of income, and as a result, can keep the land in its original form during hard economic times. For example, Sun Raised Farms showcases agriculture and solar working harmoniously together. This collection of farmers raises sheep to maintain the grounds of solar farms. A win-win!

Solar panel materials are enclosed and don’t mix with water or vaporize into the air – meaning there is no threat of chemicals releasing into the environment during normal use. In addition, the panels are manufactured to endure all weather conditions and are sealed shut to further ensure public safety. Almost all solar PV panels are made of tempered glass, pass rigorous hail tests, and are regularly installed in Arctic and Antarctic conditions. 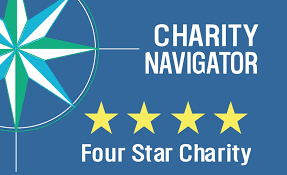