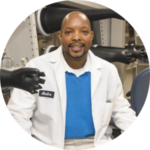 André Taylor is an Associate Professor of Chemical and Biomolecular Engineering at New York University Tandon School of Engineering. André’s research areas include nanoscale assembly, electrocatalyst synthesis, solar cells, energy storage, and fuel cells, and he has received several prestigious awards for the impact of his research on the clean energy industry.[3]

André previously led the Transformative Materials and Devices research laboratory at Yale University, where his team focused on developing materials and devices that aid in energy conversion and energy storage.[9]

In 2018, André started working at NYU Tandon where he leads an initiative to improve the sustainability of fuel cells and energy storage technologies, while also cultivating diversity and inclusion within the chemical industry.[7]

André's research at NYU Tandon primarily focused on perovskite solar cells. “The attraction of these cells is that they are very cheap — cheaper than silicon,” André stated in an interview with Tech Briefs.[7] Not only are perovskite cells cheaper, they are also more efficient, durable enough to withstand winter conditions, and have a wide range of uses.[7] “There are many possible applications for integrated flexible photovoltaics; for example, you could put one on your automobile and it would conform to the surface. Then, instead of having to find the next charging station, the integrated solar panel enables you to just drive, park, and while your car is parked and idling, charge the batteries,” André explains.[8]

Perovskite cells are not yet commercially available, but there is hope that will change. André states that there needs to be more research to increase the stability, size, and durability of the cell.[8] The United States Department of Energy also states that there needs to be more research on some of the environmental impacts of the materials used in the cell, specifically the lead-based perovskite absorber.[6] However, there has been astounding progress on the efficiency on perovskite cells in recent years. When looking at the conversion efficiency, the cells were about 3% efficient in 2006, but over 25% efficient in 2020.[6] With more research and improvements, it is possible that these cells will become widely adopted in the solar industry.

André has received many awards for his research and contributions to the clean energy industry throughout his career.

A full list of André’s published research can be found here.