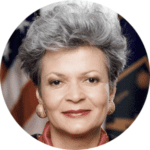 Born as Hazel Reid in 1937, Hazel O’Leary became the first African American and the first woman to hold the position of United States Secretary of Energy.

Hazel was born in Newport News, Virginia to Russel E. Reid and Hazel Reid, both of whom were doctors.[4][5] Hazel attended school through a segregated school system for eight years in Newport News, but her parents decided to send her and her sister to live with their aunt in New Jersey for a better education.[6] Hazel attended an integrated arts high school in New Jersey and went on to receive a Bachelor of Arts degree at Fisk University, a private historically black university (HBCU) in Nashville, Tennessee.[6] In 1966, Hazel earned a law degree from Rutgers Law School in Newark.[6]

Shortly after obtaining her law degree, Hazel became an attorney at the New Jersey State Attorney General’s Office, and in 1969 she moved to Washington D.C. to work at the Coopers & Lybrand accounting firm.[2]

A few years later, President Gerald Ford appointed Hazel to the Federal Energy Administration’s Office of Consumer Affairs where she represented the concerns of consumers who challenged the influence of major energy producers.[2] In this position, she gained the support of other minority communities. She helped lead a group of Native Americans who owned energy-producing lands which resulted in the Native American community having a higher-profile presence in federal energy affairs.[3]

President Jimmy Carter appointed Hazel to head the Department of Energy’s Economic Regulatory Administration in 1977[2]. In this role, Hazel’s agency advocated for price controls on various forms of energy, and Hazel successfully lobbied Congress to pass the Fuel Use Act.[3]

In January 1993, Hazel became the seventh United States Secretary of Energy.[2] Nominated for this position by President Bill Clinton, she was a strong advocate for energy efficiency and renewable energy. Hazel formed partnerships with nonprofits and manufacturing companies to implement energy-efficient technologies, which helped drive their commercialization. [1] She also requested additional funding for the research of wind, solar, and energy-efficient technologies to promote the development of clean energy.[1] Furthermore, Hazel opposed increases in energy taxes,[3] led efforts to find safer ways to dispose of atomic waste,[2] and pushed the Clinton administration to end nuclear testing in the United States.[4] Hazel also laid the framework for the United States Department of Energy’s strategic plan, and as a result, many clean energy successes in the United States trace back to Hazel’s original plan of continuing to develop clean energy technologies and practices.[1]

Since resigning from Secretary of Energy in 1996, Hazel has remained an active advocate in the energy industry. She is currently a member of the Ambassadors of the Minorities in Energy Initiative[1], served on the boards of Africare,[4] works with a variety of nonprofits including World Wildlife Fund,[2] and supports higher-education institutions by working with Morehouse College[2] and serving as president of Fisk University from 2004 to 2012.[1]