On June 10, the North Carolina Sustainable Energy Association (NCSEA) released its milestone 50th episode of the Squeaky Clean Energy Podcast, “Get the Scoop on Clean Energy with Gov. Cooper,” where host Matt Abele conducted an exclusive interview with North Carolina Governor Roy Cooper on the progress of NC’s Clean Energy Plan from 2018 and his newest Executive Order 218 which states NC’s commitment to offshore wind development.

Released on June 9, Executive Order 218 commits North Carolina to offshore wind by 2.8 GW to 2030 and 9 GW by 2040. These planned developments will power around 2.3 million homes by 2040 and support a robust supply-chain clean energy economy. The order also directs the NC Department of Commerce to name a clean energy economic development coordinator and establish the North Carolina Taskforce for Offshore Wind Economic Resource Strategies (NC TOWERS).

Currently, there are 9 residential wind systems and 18 commercial wind farms in NC, making up only 0.4% of NC’s total electricity generation mix. Offshore wind carries especially great potential along the east coast because of the strength and consistency of wind along the United States Outer Continental Shelf. These developments will be crucial to NC’s diversified clean energy portfolio and help NC achieve 70% reduction of carbon emissions by 2030 and zero net emissions by 2050, as outlined by Executive Order 80. To learn more about offshore wind energy, check out this video by the Bureau of Ocean Energy Management. 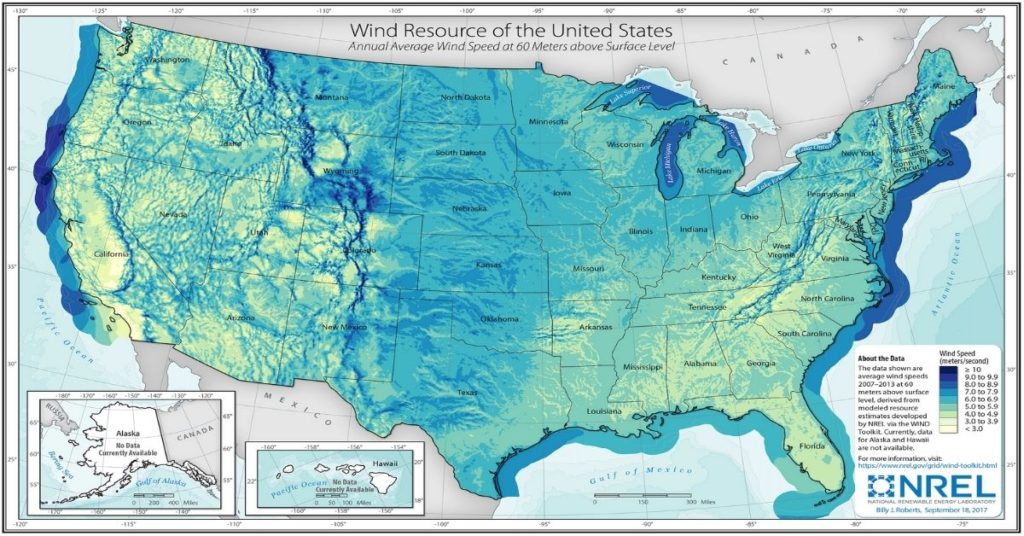 As shown by this map of the United States’ wind speeds, the wind speeds off the east coast from South Carolina to Maine are consistently above 9 meters/second. Source: NREL

As mentioned in the podcast, NCSEA has commissioned a report with RTI international on the economic impact of clean energy in NC, which will be released later this month in NCSEA’s publications tab. The report, which is published every two years, concludes that nearly 20 billion dollars have been invested in NC clean energy from 2007-2020 with project investment in 2020 alone totaling 1.6 billion dollars.

Beyond just the most recent order, Matt also notes that Governor Cooper's environment and clean energy leadership with his signing of the Multi-State Medium- and Heavy-Duty Zero Emission Vehicle Memorandum of Understanding (MOU). As the only signatory from the southeast, Governor Cooper leads the region’s push for achieving 100% tailpipe pollution-free electric trucks and buses by 2050, which would reduce the amount of unhealthy greenhouse gases and particulate matter in the air. For a more comprehensive look at Cooper’s plan for accelerating electric vehicle adoption in NC, take a look at the Department of Transportation’s ZEV Plan.

We would like to thank first-time and loyal listeners for their interest in clean energy policy in North Carolina and encourage them to stay engaged with NCSEA on social media! The Squeaky Clean Energy Podcast brings the latest in North Carolina clean energy policies and news. To make sure you’re notified when new episodes are released, please subscribe to the podcast on Apple Podcasts, Spotify, or SoundCloud. Feel free to leave us a review or comment on any platform!