Duke Energy filed its proposed Carbon Plan with the NC Utilities Commission on May 16. This article provides a preliminary analysis of the proposed plan, including projected deadlines, methodologies, and assumptions. Stay tuned for more information and a deeper dive in the coming weeks. Check out this NCSEA article for additional context on the stakeholder proceedings leading up to this filing. 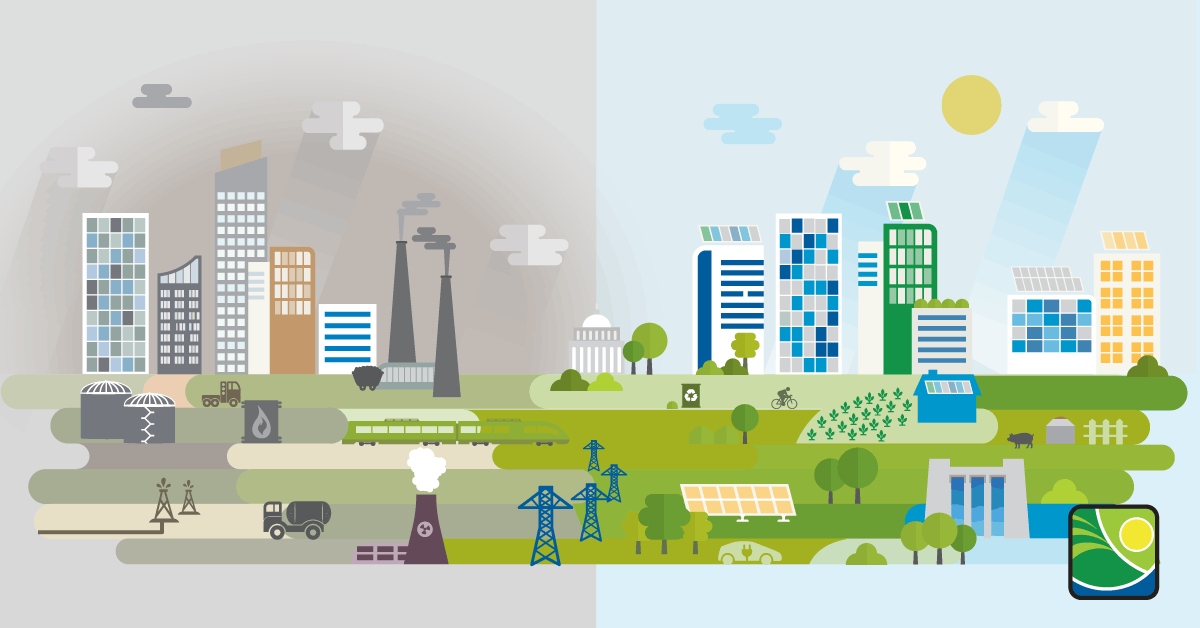 A Brief Background of the Carbon Plan Process

Last fall, Republican leadership in the North Carolina General Assembly and the Governor reached a bipartisan agreement establishing the first carbon reduction mandates for a state in the southeast. This agreement, enacted as House Bill 951: Energy Solutions for North Carolina (‘HB 951’), codified requirements for the electric utility sector to reduce carbon emissions 70% by 2030 and achieve net-zero emissions by 2050. To reach these goals, the legislation also directed the North Carolina Utilities Commission (‘NCUC’) to develop a ‘Carbon Plan’ to outline the specific measures necessary to reach emissions reductions.

To create its Carbon Plan, the NCUC directed Duke Energy (‘Duke’) to file a proposed Carbon Plan after conducting at least three stakeholder convenings with a broad coalition of interested parties. The initial plan from Duke was due to the NCUC by May 16, with the Commission’s final Carbon Plan due by December 2022. Once finalized, the Carbon Plan will subsequently be revisited every two years.

In accordance with the May 16 deadline, Duke did file its proposed plan last week, though with very little insight ahead of time as to what it may contain. NCSEA, our partners, and many others raised concerns throughout the stakeholder processes about a lack of transparency by the utility, creating an almost black-box type scenario that would catch many by surprise once the final plan was filed. While Duke had more than eight months to prepare their plan, NCSEA and partners now have less than 60 days to digest the nearly 900-page document, provide feedback, and conduct their own modeling in response. NCSEA is now hard at work interpreting the plan and will also be working with Synapse Energy Economics to conduct modeling of its own.

The filing of Duke’s carbon plan marks a step in the right direction for energy planning but multiple areas require revision to better support a clean energy economy. Overall, the proposed plan presents four scenarios depicting the future of electricity generation in our state, as seen in Figure 1. Notably, only Portfolio 1 achieves the HB 951 requirements of reducing carbon emissions 70% by 2030. This is cause for concern, which is shared by NCSEA and numerous other partners, as Peter Ledford, NCSEA’s General Counsel and Director of Policy, explained: “While the law does allow the Commission the flexibility on the deadline for compliance, NCSEA believes that we should strive to comply by 2030 in the most affordable way possible.” 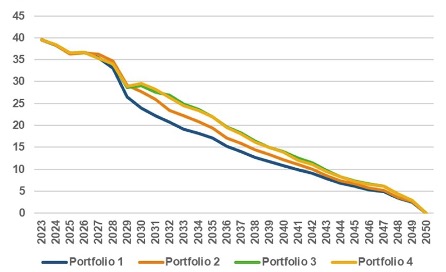 Natural Gas: Another major concern raised by NCSEA and partners is the proposal for 2 GW of new natural gas resources. It’s hard to envision a significant reduction in emissions or a net-zero future with the buildout of new natural gas resources within the state. Even further, there’s concern that building these capital-intensive centralized generation resources will walk us down the same path of early retirement, requiring another securitization fix to allow Duke to recover costs on the ratepayer’s dime.

The carbon plan also includes additional assumptions that these new natural gas resources will rely on an unconstructed, costly pipeline into the state. If the past is any indication, pipeline development within the state is a serious gamble that may lead to significant capital investments with very little return. Implications for the environment and local communities must also be factored into the decision-making process.

As Ledford said on the subject: “Investing in new natural gas generation, which has a 40 to 60-year lifespan, signals that Duke isn’t serious about meeting either the least-cost requirement or the carbon requirement. To meet the carbon requirement, these assets would have to be shut down by 2050, much sooner than their lifespan would otherwise require, which would mean accelerated cost recovery from ratepayers, leading to higher bills. To keep these natural gas assets online past 2050 requires dependence on a green hydrogen supply chain that quite simply doesn’t currently exist."

Other Technologies: Duke’s proposed plan also places quite a bit of emphasis on small modular nuclear reactors (‘SMRs’) and hydrogen to provide low carbon generation, as seen in Figure 2, rather than deploying proven renewable energy sources like wind and solar. This is a red flag as SMRs are an unproven technology that is not yet commercially viable. Further, to date, hydrogen technology has been cost-prohibitive, and mostly focused within the transportation sector. We’d have to see significant progress made in the near future to rely on this technology as a major generation resource to reach a carbon neutral electric sector. Overall, although SMRs and hydrogen offer potential carbon reductions, they should not be relied upon too heavily given the considerable unknowns.

Renewables: At the same time, North Carolina has shown that present day, commercially viable technologies, such as wind and solar, can drive down carbon emissions, as illustrated by the latest NC Department of Environmental Quality Greenhouse Gas Inventory.

An area that’s drawn significant attention over the past few months in NC is the offshore wind (‘OSW’) industry. At a base-level, this technology has already proven itself across the world, with gigawatts of turbines deployed in the water. The potential is starting to come to fruition here in the state with projects in planning and development off the coast, including the Kitty Hawk and Wilmington East wind energy areas. Duke’s filing itself calls OSW “mature, scalable, and increasingly cost-effective" following the utility securing a lease in May 2022. Yet, reading further, one finds that wind is artificially capped at 1,800 MW, which comes across as a low estimate in light of NC having the second highest OSW net technical energy potential in the US and an estimated 4 GW of capacity leased through the past two auctions.

Solar, the region’s most cost-effective and readily scalable resource, is also arbitrarily capped between 5.4 to 6.8 GW of new development across Duke’s proposed portfolios. In the wake of our state’s rise to becoming a national leader in installed capacity, NCSEA and partners do not believe that capping solar power is justified, nor reasonable. Notably, the plan proposes a gradual increase in the amount of solar it can interconnect, but not until 2034. This is yet another instance of Duke gravitating towards large capital infrastructure investments, such as natural gas pipelines and nuclear power plants that guarantee a rate of return for the best interest of their shareholders instead of pursuing what is best for their ratepayers.

Following the passage of Senate Bill 3 in 2007, which created a Renewable Energy Portfolio Standard (‘REPS’), Duke was mandated to integrate additional renewable resources into its generation mix. At the time, the utility had proposed additional coal resources, with the assumption that they could transition these facilities to burning biomass, like wood, in the coming years. This did not happen, but rather, other renewable sources such as solar, ended up accounting for approximately 98% of the utility’s REPS compliance. A similar paradox is now illustrated with Duke claiming that its proposed natural gas facilities will be capable of transitioning to hydrogen in the future. Instead of turning its sights on gas, SMRs, and hydrogen, Duke’s carbon plan should be investing in clean technologies like solar and wind that have already been proven as some of the lowest cost options on the market.

Cost Assumptions: Yet another area of concern for NCSEA and partners includes an unreasonably high estimate of transmission costs for solar and an inaccurately low depiction of construction costs for projects like hydroelectric and nuclear. Further, Duke characterizes the lone scenario that reaches the emission reduction requirements by 2030, Portfolio 1, as the most costly and risky path forward. It is important to note that, though this portfolio is the most expensive according to Duke’s estimates, the difference is relatively small.

Even further, Duke has been known to overestimate clean energy prices in the past, as seen with its recent Integrated Resource Plan. As part of its carbon plan modeling, the utility ran just one scenario with various sensitivities for natural gas prices, which means three portfolios fail to capture price volatility for fossil fuels over the past decade.

Duke’s proposed plan does includes an analysis of how each portfolio would impact residential customer electricity rates. However, NCSEA and its partners disagree with the utility’s claims that clean energy is to blame for the rising price of electricity. Industry experts projected that HB 951 would increase rates across the state, though this is not the fault of sustainable energy. Rather, NC’s regulated monopoly market leads to a lack of competition and an insufficient grid planning process. This, in turn, has led to inadequate investments in the grid and unwise investments in large obsolete generation resources, the root of any increases in electricity prices.

Other Considerations: An analysis of the proposed plan also unearthed red flags with behind the meter issues related to energy efficiency, residential solar, and net metering assumptions. “Grid edge assets” seem to be undervalued in the context of annual savings and affordability.

Further, Duke’s projections of electric vehicle (‘EV’) deployment reaching 5.5-6.25% of vehicle fleet composition by 2035 appears to be unusually low. To note, NC has already passed that figure in mid-2022. Even further, Governor Cooper’s EO246 set targets of deploying 1.25 million zero-emission (‘ZEVs’) vehicles on the road by 2030 and having 50% of all new vehicle sales comprised of ZEVs by the same date. Industry experts also project EV growth to be exponential in the coming decade due to technological innovations and favorable market conditions. This mismatch in utility projections and market trends seems to be a recipe for poor load growth projection and management.

Duke is also proposing to merge the balancing areas of its two utilities, Duke Energy Carolinas and Duke Energy Progress. While NCSEA has long supported merging the two balancing areas, Duke also threatens to create new balancing areas if South Carolina does not support its proposed carbon plan, separating NC from SC. This has the potential to lead to serious complications in planning and cost allocation.

Another important takeaway is the lagging retirement of coal units proposed by Duke. A conundrum exists in this proposal with Duke planning to operate carbon emitting coal-fired powered plants through 2036 while also attempting to meet the state-mandated carbon reduction goals. In Figure 3 below, the utility is planning to operate Marshall 3 and 4 through 2033 and Belews Creek 1 and 2 through 2036. It is no surprise that three-quarters of Duke’s proposed portfolios fail to meet the HB 951 2030 requirement when considering the reliance on high-emitting energy sources well into the next decade. 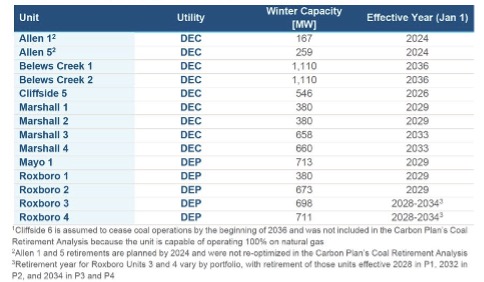 Takeaways for the path forward

NCSEA and its partners are focused on creating a clean energy economy for all North Carolinians. There is a strong indication and historical record that Duke Energy prefers taking the path of driving shareholder earnings through monopoly ownership at the cost of ratepayers and a carbon-free future. Duke’s proposed carbon plan is an inadequate proposal that kicks the can down the road on decarbonization, places heavy emphasis on modeling that favors fossil fuel generation and unproven technologies. While Duke was directed by the NCUC to file the first draft of the carbon plan, the onus is truly on the Commission themselves to determine the best path forward. For that reason, clean energy advocates, consumers, businesses, and other interested stakeholders will be weighing in with alternative modeling and suggestions indicating a path to decarbonization in line with the state mandated goals established in HB 951.