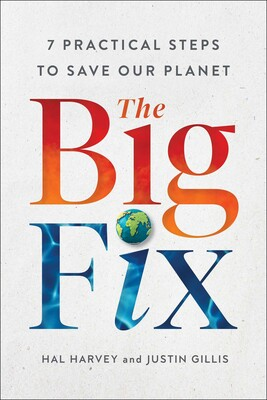 On Episode 78 of the Squeaky Clean Energy podcast, Justin Gillis of The New York Times and Hal Harvey of Energy Innovation talk about their new book, The Big Fix: 7 Practical Steps to Save Our Planet. In the conversation, the authors highlight inspirational carbon emission reduction stories at the state and local levels and ways in which clean energy solutions can transcend political divide in several sectors. Read and listen in to hear these stories and how they offer comprehensive, scalable strategies for clean energy policy in North Carolina!

Gillis and Harvey’s individual backgrounds in climate change and clean energy empowered them to collaborate on their book.

Justin Gillis is an award-winning journalist with four decades of experience translating complex issues into approachable messaging for major news outlets. As the lead reporter on climate science at The New York Times for nearly a decade, he won the John B. Oakes Award for Distinguished Environmental Journalism for a series of front-page articles explaining the climate crisis. He is a graduate of the University of Georgia and is a fellow at the Harvard University Center for the Environment.

Hal Harvey is Chief Executive of Energy Innovation, a nonpartisan climate policy firm delivering research and analysis to help policymakers make informed choices. He is also a senior fellow for energy and the environment at the Paulson Institute, an independent think tank based in Chicago, IL. A recipient of the United Nation’s Climate and Clean Air Award, the Heinz Award for the Environment, and the State of California’s Haagan-Smit Clean Air Award, Harvey has been appointed to national and international climate panels.  Additionally, he has bachelor’s and master’s degrees in engineering from Stanford University.

After years in journalism, Gillis realized there was a gap in resources that offered everyday citizens pathways to decarbonize their lives. “There needed to be a book because it was clear that more and more people that I knew were getting concerned about climate change, but people didn’t know what to do. People felt disempowered.” Gillis had connected with Harvey years earlier and thought Harvey had a good grasp of practical solutions that would make them a good team.

The authors explained that since society has used up most of the global carbon budget, it would be critical to focus on expedited ways to reduce carbon emissions. “We simply do not have time to do things that sound good and look pretty but do not scale,” said Harvey. As a result, their book describes technologies and policies that can effectively reduce emissions in sectors including electricity, transportation, buildings, industry, urbanization, use of land, and investment in a timelier manner.

The book presents solutions that not only help mitigate climate change but also deliver economic benefits to local communities. “Even people who do not think climate change is happening can still get behind them. Talking about the solutions gets you past the tribal argument over ‘is there climate change or not?’ and into more productive discussion,” explained Gillis.

What are the Overarching Pillars of the Book?

The Big Fix stresses the importance of having clean electric utilities because it allows for cascading decarbonization of the buildings and transportation sector. Another topic is how to implement sustainable urban form, which refers to designing cities for people rather than cars, adding trees and paths and reducing sprawl. Further, the authors share actions that can lead to cleaner industry, including pressuring governments to change standards about materials they use, like steel and cement. Sustainable agriculture is another pillar of the book. The authors champion national experiments like reforestation and afforestation at a large scale and more effectively bolstering carbon sinks and storing carbon in soil. The authors also urge the public to support an aggressive national research agenda to create technologies, such as green hydrogen, that could be useful in the later stages of the clean energy transition.

Despite the need for future research, governments and businesses must take action to reduce carbon emissions over the next decade. Instead of building gas pipelines and planning to use new technology in the future, the authors make it clear that energy companies need to transition to solar and wind now. “Don’t substitute the promise of research tomorrow for action today,” said Harvey.

How can Citizens Address the Climate Crisis?

While some people feel helpless about solving the climate crisis, Gillis and Harvey offer readers a way to make an impact in their daily lives. They encourage readers to be “green citizens” by advocating for change in their communities. Gillis emphasized that since big policy can take time at the federal level, society needs to be pursuing solutions at the local level as well. “All across America, local governments near and dear to citizens are making decisions to perpetuate the fossil fuel economy,” he explained. For instance, a local government may be more inclined to electrify its fleets if the community advocates for that change.

Harvey added that it is critical for advocates to have clear goals and an understanding of who makes decisions and how. People should be open-minded as they do research to determine what the best decisions should be and find facts supporting those decisions.

The key to solving climate change, according to Harvey, exists in the power of alliances. When people join forces with others, they are better able to share their voices with governments and advocate for clean energy.

Thank you to Justin Gillis and Hal Harvey for speaking with us and spreading inspiration around clean energy and ways to address the climate crisis. Read The Big Fix: 7 Practical Steps to Save Our Planet to learn more. And, remember to listen and subscribe to the Squeaky Clean Energy podcast wherever you stream to hear the full conversation.