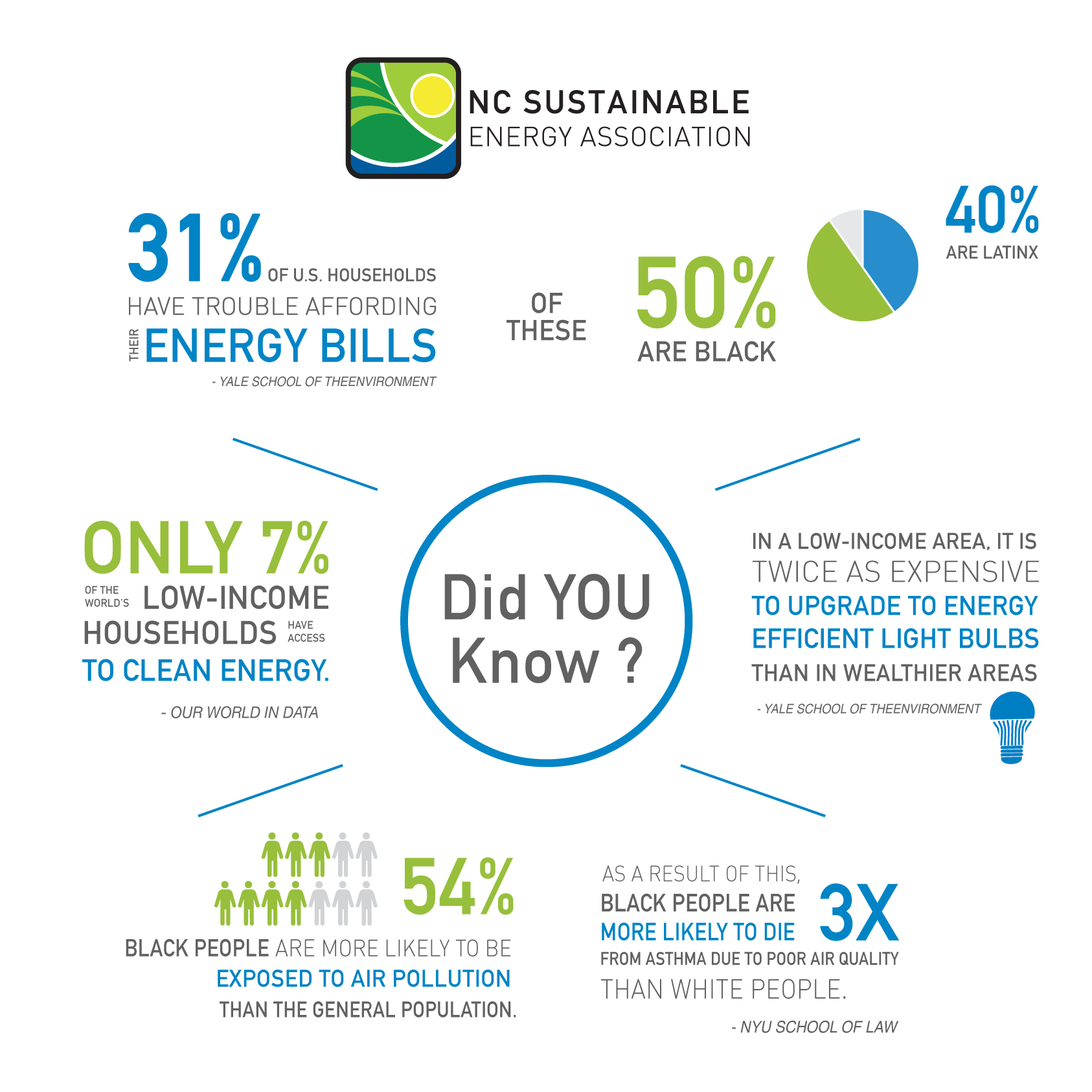 With racial discrepancies being brought to light in every area of American life, the clean energy industry needs to look inward at what it can do to improve its access and equity.

For decades, communities of color and low-income areas have been treated as lesser in the energy sector. Currently, almost a third of U.S. households have trouble affording their energy bills, and of these people, 50 percent are black and 40 percent are Latino. Additionally, black people are 54 percent more likely to be exposed to air pollution than the general population. As a result of this, black people are three times more likely to die from asthma due to poor air quality than white people. And, according to NCSEA’s 2018 Census Data, 80 percent of employees in clean energy in North Carolina were white. These stark racial contrasts show the lack of racial equity that has existed in the energy industry since its beginning.

With the rise of clean energy, the energy sector had the chance to create a more equitable landscape for all people regardless of their race or income. However, many of the same inequities seen in the past have shown up in the clean energy industry. It’s not too late, though.

People of color and low-income communities do not have equal access to clean energy and efficient technologies. While renewable energy usage is increasing as a whole, only about 7 percent of the world’s low-income households have access to clean energy. In a low-income area, it is twice as expensive to upgrade to energy efficient light bulbs than in wealthier areas. Additionally, utilities spend more than four times as much money on energy efficient technologies for higher-income neighborhoods than on less affluent areas.

Additional restrictions, such as low credit scores and inability to afford “upgrades” limit low income families from utilizing clean energy. Plus, if a family is renting a place, rather than owning, that creates more boundaries to clean energy utilization.

By not making clean energy as affordable as it can be, it creates a barrier for low-income families to utilize renewable energy. Families are now burdened with the choice between being energy efficient and being able to pay their energy bills each month. This choice is unjust and unethical.

Some states have already adopted plans to help increase access to clean energy. For example, New York offers a “bill neutral” program that ensures financing payments are equal to or less than utility savings earned by improvements. South Carolina aids rural customers whose incomes are lower than the national average by 15 percent, which has led to a 34 percent decrease in energy use and saved an average net annual savings of $288 per home.

In March of 2020, NCSEA was chosen to lead a project with the Department of Environmental Quality to evaluate the services given to low-income residents in North Carolina. With the N.C. Weatherization Assistance Program (NCWAP), NCSEA will do research to create a data sharing protocol to improve the standard of service for low-income residents of the state. NCSEA advocates for innovative financing mechanisms that allow customers to upgrade their home without an increased financial burden.

Additionally, NCSEA created the Energy Solutions Reserve Fund, which financially supports utilities. Specifically, it identifies customers who are in need of the most help, such as rural residents, and eliminates barriers to clean energy.

Increasing access to clean energy for low-income areas would increase the amount of property taxes paid to local governments, which would provide significantly more resources for that locality to afford schools, roads, emergency services, and other necessary infrastructure.

Not only will allowing clean energy access to low-income areas decrease their financial burden, but it will also provide clean air, safety, and comfort, which will dramatically increase the health of residents.

This post was written by NCSEA Fellow Nadia Innab.