NCSEA was thrilled to host our first in-person event in nearly two years after the recent pandemic put a pause on face-to-face gatherings. On March 24, attendees spent an engaging evening discussing the budding electric vehicle (EV) market in North Carolina. The topics of equity, diversity, and inclusion (ED&I), cross-sector collaboration, and education were all identified as critical focal points on the journey to reaching Governor Cooper’s goal of 1.25 million ZEVs on the road by 2030. Proactive planning and transparent stakeholder processes also emerged as imperatives to enable NC to move in the right direction on the road to decarbonization.

NCSEA Executive Director, Ward Lenz kicked off the event recalling his own journey in the EV field, highlighting the immense progress that’s been made even in the past 4-5 years. The panel was moderated by Sean Flaherty, Principal Planner of Triangle J Council of Governments, and featured a group of EV subject-matter experts including:

Zach Pierce set the stage with a deep dive into Executive Order 246 (EO246) signed by Governor Cooper at NC A&T State University in January 2022. Specifically, Zach spoke about the expanded greenhouse gas (GHG) emissions goals from the EO, which includes 50% carbon reduction below 2005 levels by 2030 and net-zero emissions economywide no later than 2050.  Zach also spoke about the EV specific goals within the order, headlined by the objective of at least 1.25 million zero emission vehicles (ZEVs) on the road by 2030 and 50% of all in-state new vehicle sales comprised of ZEVs by that same date. This is ambitious, as the current number of ZEVs on the road in NC is approximately 40,000, though experts anticipate exponential growth in the coming years due to technological and economic factors.

Pierce stressed that NC must work to distribute the benefits of this clean energy transition in an equitable and just manner. Notable initiatives of EO246 to achieve this include: 1.) workforce development partnerships with universities across the state targeting underrepresented communities, 2.) the hiring of an external consultant to establish effective engagement with a diverse group of stakeholders, and 3.) requiring each Cabinet to identify an environmental justice lead.

Pierce stated that EO246 builds off the ambitions of EO80 and House Bill 951. Future efforts will utilize the state’s Clean Energy Plan as a guide to implement policies and frameworks to decrease sector emissions. As part of this, Pierce explained that the Department of Transportation has been tasked by the Governor with establishing a Clean Transportation Plan by April 2023. This focus is paramount, as the transportation sector is the largest contributor to greenhouse gas emissions in NC, according to its recent GHG inventory. 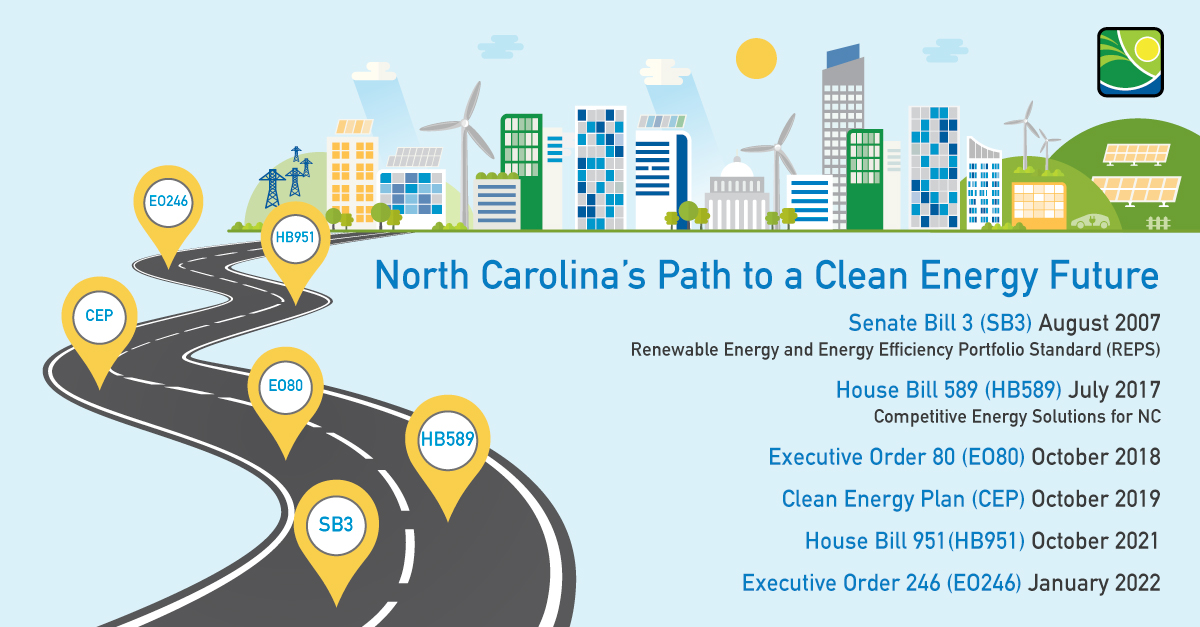 Megan Anderson followed up with a discussion on the climate goals of the City of Raleigh. The city has been working to transition its fleet of nearly 1,000 vehicles away from gas and diesel to non-emitting EVs over the past few years. It has also partnered with Advanced Energy Economy (AEE) to create an EV-ready playbook for its residents to promote the adoption of EVs.

Anderson explained that forward-thinking infrastructure is a focus of Raleigh’s electrification initiatives. The American Rescue Plan Act (ARPA) and Infrastructure Bill (IIJA) will play major roles in funding the infrastructure to achieve this goal. She also brought up the importance of ED&I while building the future of EVs in Raleigh, stating that it’s hard to “undo” these processes, emphasizing the need to engage underserved communities early on. Anderson urged that municipalities must continue to collaborate and share information through groups like the Clean Cities Coalition Network and the Southeast Sustainability Directors Network to promote a climate of equal and affordable access.

Marshall Cherry took the floor next to discuss the deployment of clean energy and EVs in the northeastern part of the state. He gave an in-depth look into REC’s Vision 2025, the co-op's multiyear strategy to help the region meet its unique needs in a quickly evolving energy landscape. Cherry explained that northeastern NC is one of the most economically distressed areas of the country, where electricity bills can comprise a significant portion of a household’s budget due to inefficient energy use and design. And though NC is one of the fastest growing states, he noted the trend does not apply to the coastal plain, where many communities are decreasing in population size. ARPA and IIJA funding are critical to rural regions of the state often underserved by private entities and other grant programs to ensure communities most vulnerable to high energy burdens are not left behind. He stated that though EV adoption will be a heavy lift in the region, it is essential to providing a higher quality of life for Northeastern North Carolinians.

To break down barriers to entry, the co-op’s EV Pilot Program implemented a discounted rate for EV charging. Member-owners are offered a flat fee of $50 a month to charge their EVs up to 450 kWh. Further, they have the ability to opt-in to lower tiers of the programs depending upon driving habits. REC also includes additional enrollment incentives, such as a free charging station, free installation, and a $1000 sign up promotion. Additionally, REC plans to purchase and raffle off EVs to help put additional member-owners behind the wheel. Cherry underlined the importance of people experiencing the benefits of cost savings and energy efficiency. Education and engagement campaigns will remain imperatives to promote this initiative moving forward.

Cherry finished by discussing the need to confront “charging deserts” to directly expose low- and moderate-income communities to EV adoption. He asserted that pursuing partnerships to replicate programs like these, while also funding inclusive charging networks, will effectively promote EV deployment across the state.

Ben Smith of NCSEA closed out the panel by bringing to light considerations of policy and regulation in the context of EVs. Smith returned to the importance of cross-sector collaboration to develop and accelerate the EV transition in NC, noting Drive Electric USA as a prime example. He also talked about the delicate balance that exists between marketplace structure and utility regulation. More specifically, Smith spoke at length about NCSEA’s role at the NC Utilities Commission in advocating for EV specific rates, make-ready programs, and other incentives that accelerate the transition to EVs. He then concluded by stating he’s hopeful about the future of EVs in NC but made clear that the NCUC plays a crucial role in approving impactful regulations. As such, he urges public engagement to promote transparency and accountability of large utilities like Duke Energy.

Attendees left the room with a clear understanding that EVs are playing an increasingly vital role as NC transitions to a low carbon economy. Furthermore, cascading effects can be achieved when the transportation and energy sectors work together on this clean energy transition. With the EV market changing rapidly, municipalities and businesses within the state must collaborate across sectors to ensure we’re ready to capitalize on the growth ahead.

While we’re seeing incredible growth and anticipation in the private markets, federal and state funding will play a critical role in accelerating the growth of EVs, while ensuring it’s inclusive along the way. Failure to do so will leave historically underserved communities and voices further behind. With approximately 2% market penetration of EVs in NC at the current moment, we’re still at the very early stages of the growth trajectory. The opportunities that lie ahead are incredibly exciting!

Join NCSEA and our partners at upcoming Making Energy NetWork Policy Forums and at the Making Energy Work Conference scheduled from October 25-27 to continue mapping out the EV future for our state.