and goals to improve energy infrastructure that will be incorporated into its planning and reporting cycle. NCSEA staff, board members, and members were not only in attendance, but prominent presenters during the meeting.

NCSEA’s Director of Development, Ward Lenz, provided the council with an overview of the relationship between smart grids and renewable energy. One point that really resonated with the council was the correlation between adopting renewable energy and the lowering of energy bill prices.  Ward highlighted Texas as an example, as their state’s utility rates have been dropping as the state has adopted more and more wind energy. 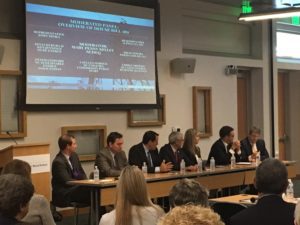 NCSEA’s General Council, Peter Ledford, sat on a panel with NCSEA members Ben Lowe of Alevo and Brian O’Hara of Stata Solar. The three panel members explained to the council how HB 589 was negotiated and how it should be implemented. Peter addressed PURPA reform in his presentation, as well as the importance of rooftop solar incentives and provisions of solar leasing that are addressed in the bill. Ben Lowe who is the Director of Policy and Market Development at the battery storage manufacturer Alevo, discussed HB589’s energy storage,

study and its desire to understand the values and benefits that energy storage can provide to North Carolina’s grid. Ben also praised NCSEA’s Energy Storage Working Group for laying the foundation for studying energy storage implementation in the state.

The Energy Policy Council “advises and makes recommendations to the governor and General Assembly on increasing domestic energy exploration, development and production within the state to promote economic growth and job creation.” NCSEA Board member, Gus Simmons of Cavanaugh & Associates, has been appointed by Governor Cooper to sit on the EPC. The EPC meets regularly.