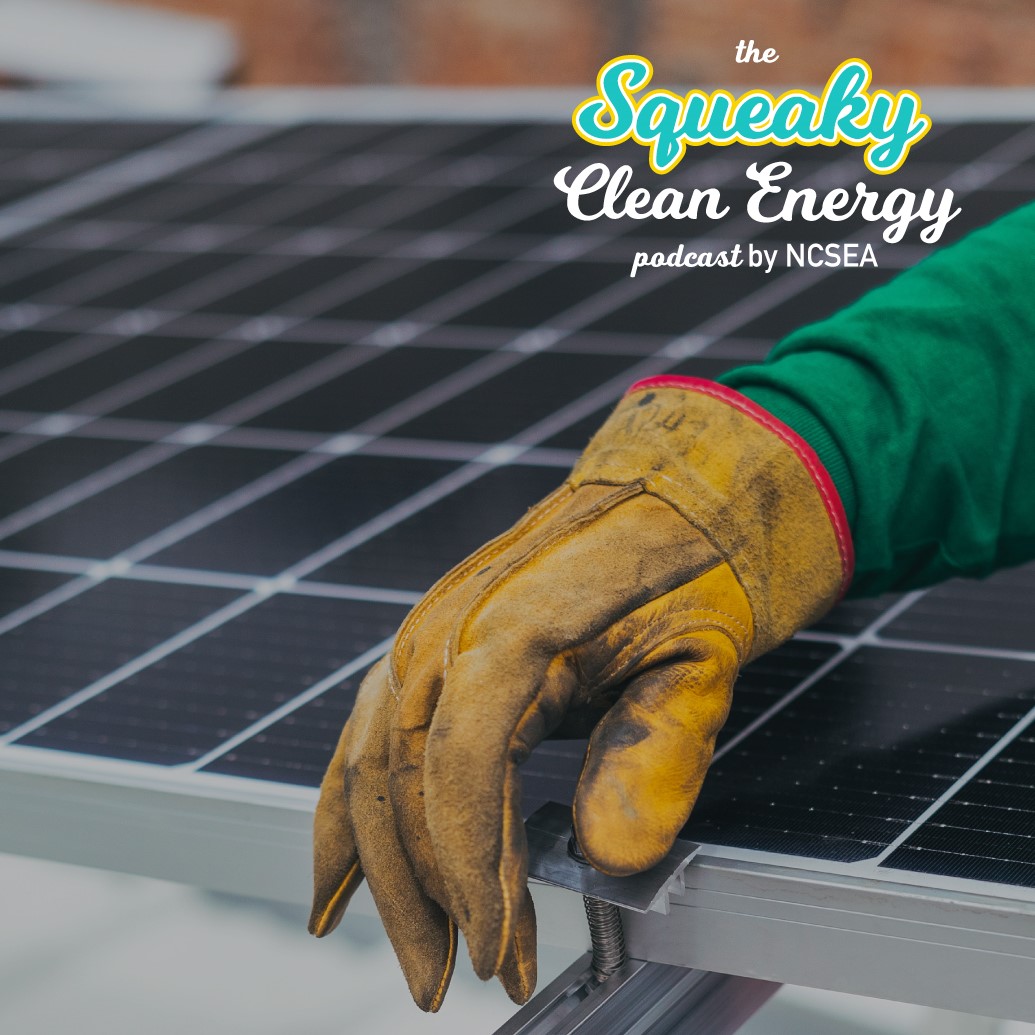 As a result of recent North Carolina legislation, including House Bill 589 in 2017 and House Bill 951 in 2021, there have been numerous proposed changes to the ways in which residential solar customers are compensated in the state. Recent developments include a new net energy metering (NEM) settlement agreement and associated rebate incentive program, as well as a NC Supreme Court decision limiting HOAs’ ability to restrict solar installations. NCSEA and its ally, SELC—a nonprofit, nonpartisan environmental legal advocacy organization—continue to advocate for rooftop solar accessibility and cost effectiveness for North Carolinians.

The episode kicks off with a discussion on the negotiated settlement agreement on NEM between a coalition of organizations including NCSEA and SELC, with a decision still pending before the NC Utilities Commission (NCUC). With this agreement, the NEM structure for rooftop solar customers is set to change from a flat 1:1 rate to a time-of-use rate. Lauren Bowen of SELC explained the intentions of the organizations who came to the agreement: “The driving force here is trying to align customer interests of those who want to go solar with the interests of decarbonizing the grid and reducing overall energy usage from fossil-based generating plants.”

Next, Bowen described the rebate incentive program, another aspect of the agreement. She explained that the policy encourages not just investment in solar but also in technology like smart thermostats and battery storage. Instead of a lottery system for receiving a rebate as used previously, the new policy sets up a program that guarantees a rebate to those eligible.

Bowen explained that the NC General Assembly directed this change to net metering, thus these revisions were unavoidable and bound to happen. NCSEA and its partners involved in the settlement also point to the consequences of failing to act, as seen in what some experts have deemed residential “solar wars” in notable states like California and New Mexico. Since change was inevitable, Bowen shared that the goal of the settlement was retaining value proposition for rooftop solar customers in a way that the utility can be on board with to support overall grid decarbonization goals, creating a “win-win” situation.

Since the agreement was filed, there has been an amendment between the utility and some intervening solar installers providing a bridge rate to ease the transition from the original NEM policy. The bridge rate includes monthly netting at a flat retail rate, where netting is done over the course of the month, to simplify the proposed structure. The exports are then credited at the end of that month at the avoided cost rate.

Additionally, Bowen noted that tension exists with timing of NEM revisions due in 2027 while also having the existing rebate program expiring at the end of 2022. Consequently, if the NCUC does not order changes before the end of this year, residents will continue to see the current 1:1 flat rate policy without rebate incentives. To note, though, the proposed incentives and rate structures may be approved at different timelines. Importantly, these two proposals are linked and part of a package deal but are proceeding for commission approval in two different dockets.

In addition to net metering changes, another important update to solar policy deals with an HOAs’ authority over residential solar placement. Bowen discussed the importance of residential rooftop solar in creating a low carbon economy, noting that North Carolina is a national leader in installed solar capacity. Though utility-scale solar installations account for a large portion of the state’s solar, rooftop solar has much room for growth. Bowen also attributed past successes in residential solar to the state tax credit and energy rebates.

The scope of an HOA’s authority in rooftop solar was decided in a NC Supreme Court decision in July. The ruling was a result of Raleigh homeowners learning that their HOA’s architectural review committee would not allow them to keep their solar panels installed on the front of their home. The homeowners refused to move the panels to a less visible side of their house because of locational impacts on energy generation. Because of this, the HOA sued and charged the homeowners daily fines. Primarily, the Court of Appeals ruled in favor of the HOA, but the ruling was appealed to the NC Supreme Court, with the higher court ruling in favor of the homeowners.

Essentially, this ruling establishes a precedent that an HOA can’t rely on a broad grant of authority of an architectural review committee to restrict solar panels. Instead, an HOA must have an explicit covenant on the books that restricts the placement of solar panels.

The decision removes one additional barrier to the installation of solar panels and is a significant win for property rights here in the state.

It is important to note that if an HOA does have an existing covenant restricting the placement of panels, this would be within the limits of the 2007 Solar Access Law. However, if an HOA does not have a covenant with explicit mention of solar, they would have to introduce a new covenant and receive a majority vote in favor from homeowners.

As discussed, there are still lots of unknowns for the future of net metering and HOA authority in the state.

We’re currently subject to the NC Utilities Commission timeline until we receive an order regarding the future of net metering, but as soon as we receive an order, NCSEA will be the first to dive into the topic on the Squeaky Clean Energy Podcast.

Further, new legislation was proposed in 2021 at the NC General Assembly to further enable homeowner access to solar within HOA communities. The proposed House Bill 842 would add additional language to the original 2007 Solar Access Law, restricting any new covenants that would limit the placements of panels to areas of the home that would reduce operational efficiency by more than 10%. In other words, if an HOA were to have a covenant on the books restricting panel placement, they could not mandate placement of panels on a part of the home that would significantly reduce the output of the system. The NCSEA team is closely tracking this bill and will provide updates should any movement occur during the 2022 legislative long session.