In celebration of Pride Month, NCSEA is elevating the ongoing need for equity, diversity, and inclusion in clean energy and the importance of creating an accessible, affordable future for all. We recently had the opportunity to talk with Zack Strauss, founder of Out in Energy, to learn more about the professional network for Lesbian, Gay, Bisexual, Transgender, Queer, and Intersex (LGBTQI+) individuals in the energy industry. 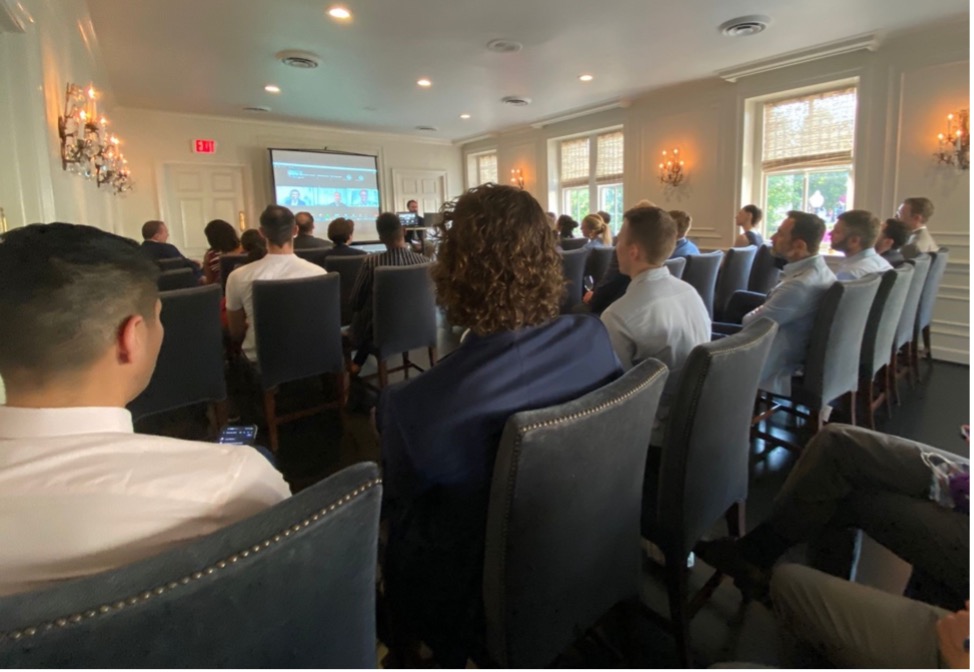 Out in Energy members listen to then-Chief of Staff at the Department of Energy, Tarak Shah, the first openly LGBTQI+ person and first person of color to hold the position. The organization hosts an array of guest speakers and networking events throughout the year across the country. (Credit: Zack Strauss)

The Importance of Celebrating Pride Month

LGBTQI+ individuals continue to face discrimination, underrepresentation, biases, micro-aggressions, and other forms of unfair treatment in the workplace. At NCSEA, we actively support and promote equity, diversity, and inclusion, which must include ensuring employees of all gender expressions and sexual orientations are accepted and supported in the workplace. Celebrating Pride Month offers society an annual opportunity to appreciate the unique identities of others while reflecting on the cultural richness brought by diverse perspectives. And though Pride Month presents a great opportunity to uplift and celebrate the LGBTQI+ community, we aim to promote equity and inclusion of this community throughout the year.

A Lack of Representation in the Energy Sector

While discrimination exists across many sectors in the US, it is especially evident within the energy industry. The International Energy Agency (IEA) states that women make up only 22 percent of people in the energy industry. In addition, about 61 percent of clean energy workers across the nation are white, according to E2 . Zack Strauss, founder of Out in Energy, stated: “If you layer sexual orientation and gender identity on top of other marginalized identities, representation for queer women, trans women, or queer women of color, the picture is bleak to say the least.”

Due to this historic lack of representation, groups like Women in Energy, Asians in Energy, Hispanics in Energy, Veterans Advanced Energy Project, and the The American Association of Blacks in Energy have been formed over the years in order to create visibility, establish community among people in the energy field, and to ensure the input of minorities into the discussions of environmental issues, energy policies and regulations, and energy technologies. NCSEA also established Women in Clean Energy (WICE) to foster a community of support, solidarity, and camaraderie for self-identifying North Carolinian professional women in the clean energy industry.

Out in Energy, a Network for LGBTQI+ Individuals

Despite the many groups that have been created to include marginalized communities in the energy sector, “There is still a big need for LGBTQI+ people to have a voice and a community to belong within the energy space,” according to Strauss. Out in Energy is a national community for openly LGBTQI+ professionals working across the energy field in the US. It was created in 2021 by the Atlantic Council, a nonpartisan think tank dedicated to U.S. leadership and engagement in international affairs to bridge the gap in representation for queer people within the energy industry. The group aims to connect individuals and elevate voices of LGBTQI+ energy and climate leaders. Although the group is relatively new, it is gaining significant traction. To note, in the spring of 2021, Out in Energy started with just 40 members but has since grown to nearly 265 people across the country.

Out in Energy accomplishes these goals by hosting networking events for members to learn from and connect with openly queer leaders in the sector, to educate people on key energy trends and policies, and to create networking and community building opportunities for LGBTQI+ individuals in the industry. The group’s virtual kickoff event in May of 2021 included keynote speaker Dean Rachel Kyte, current Dean of the Fletcher School at Tuft University and the former CEO of Sustainable Energy for All at the United Nations. In addition to the events they host, Out in Energy sends out regular newsletters to members with job openings and works to connect its members with other individuals in the network.

The Future of Out in Energy and Representation in Clean Energy

Zack has big plans for Out in Energy moving forward. He hopes to establish a mentorship program where LGBTQI+ individuals interested in energy and climate can connect with other members of the community currently working in the field. Additionally, the group plans to host more networking and guest speaker events in the coming months. Zack also hopes that the group will be able to launch its first multicultural energy summit within the next year to bring together a wide array of experiences, perspectives, and knowledge.

NCSEA would like to thank Zack Strauss for taking the time to speak with us, as well as for all of the important work he is doing with Out in Energy. To discover more about Out in Energy, you can visit their website and join the mailing list for updates on job opportunities, guest speakers, and networking events. Also, learn more about the enormous obstacles that LGBTQI+ individuals face and how to better support and advocate for the LGBTQI+ community by visiting The Trevor Project and The Human Rights Campaign Foundation.

Posted in Blog and tagged EDI