Under Executive Order (EO) 246, Governor Cooper established a target of 1.25 million zero-emission vehicles (ZEVs) on the road in North Carolina by 2030. Within that EO, the Governor directed the NC Department of Transportation (NCDOT) to create a Clean Transportation Plan no later than April 2023 outlining recommendations to reach the ZEV targets. This post will discuss what progress has been made, as well as considerations moving forward with the plan. For more background on the ZEV landscape in North Carolina, check out NCSEA’s recap on our Making Energy NetWork event on transportation electrification. 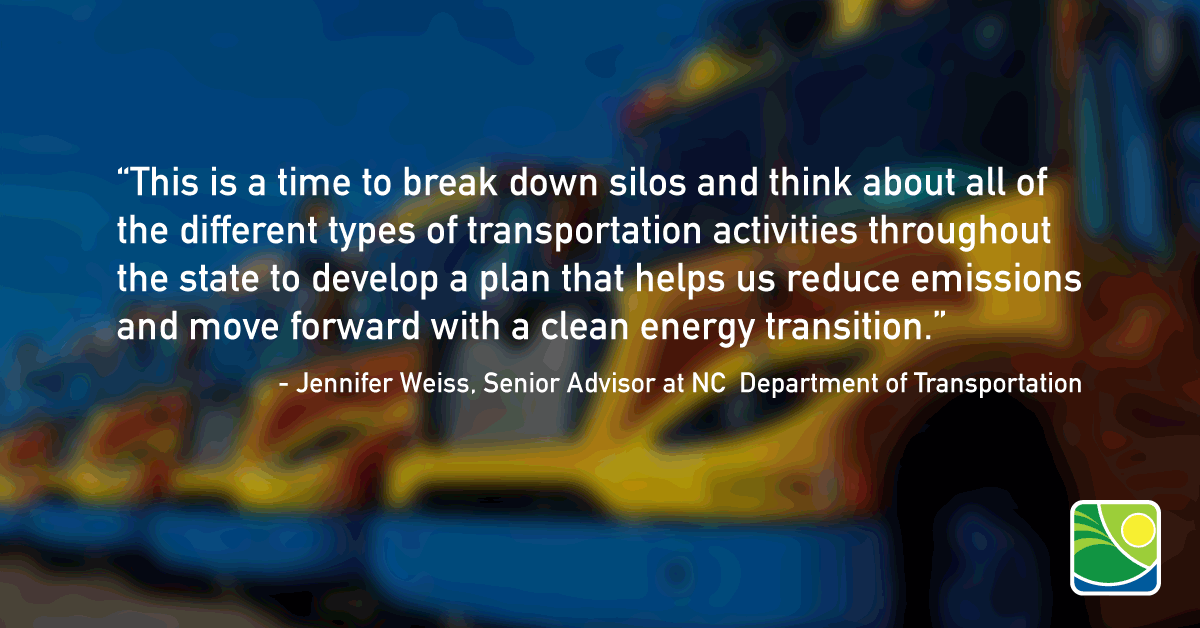 A Clean Energy Economy in NC

Earlier this year, the NC Department of Environmental Quality (NC DEQ) released an updated Greenhouse Gas (GHG) Inventory quantifying carbon emissions across the electricity, transportation, and residential/commercial/industrial (RCI) sectors. Illustrated in Figure 1, NC has experienced reductions in electricity generation and RCI combustion from 1990-2018, while transportation has steadily grown to emerge as the state’s largest emitter at 36% of total GHG emissions.

As part of an overarching push to reduce carbon emissions throughout North Carolina’s economy, and more specifically the transportation sector, Governor Cooper issued Executive EO246 in January 2022. This was the next logical step after previous initiatives, including EO80  and  House Bill 951 (HB951), which had focused on reducing emissions across the economy as a whole, within state-owned buildings, and in the electric generation sectors. Namely, EO246 outlined the following provisions and goals: 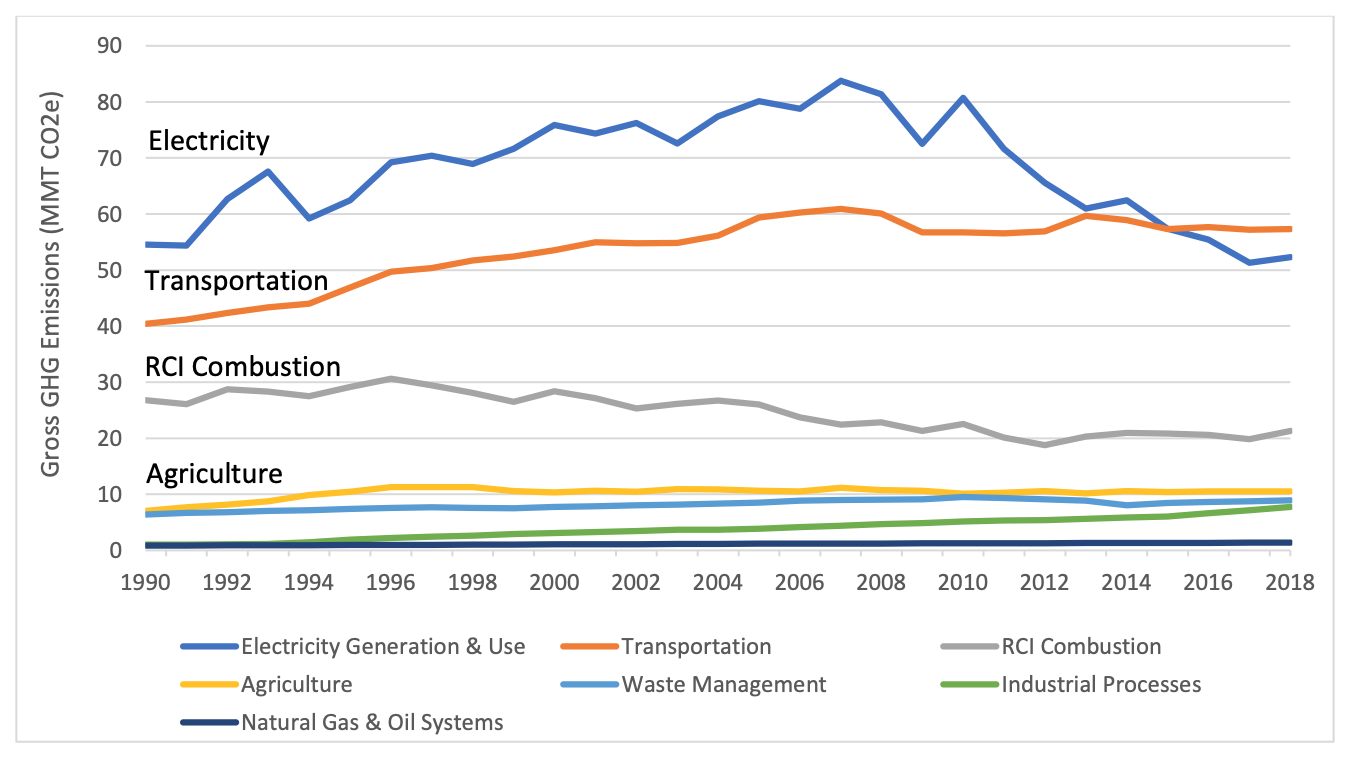 North Carolina has experienced a net reduction in GHG emissions by 23% from 2005-2018 (NC DEQ GHG Inventory). And while the electric generation and RCI combustion sectors lead the pack in emissions reductions during that same period, at 34.7% and 16.5%, respectively, the transportation sector is dwarfed at just 3.5%. These findings emphasize the need to focus on reducing emissions within the transportation sector, which is great timing given EO246 and the directive for NC DOT to create a Clean Transportation Plan.

North Carolina already has an established roadmap for the successful creation of an agency created emissions reduction plan, with the creation of the NC Clean Energy Plan. In this case, EO80 directed NC DEQ to create a plan outlining recommendations for reducing power sector greenhouse gas emissions. That plan led to a series of recommendations that inevitably led to HB951 and the first carbon reduction targets for the electric sector by a state in the southeast.

With the success of this agency-lead process behind us, NC DOT is well equipped to host a similar process leading to a series of recommendations encompassing the entire transportation sector from light-duty passenger vehicles to medium-and-heavy duty transport and hard to abate activities like shipping vessels and airplanes. See Figure 2 for a breakdown of NC transportation-related emissions by activity. This is no small task, but given the recent wins in other sectors, NCSEA and partners are confident that our state is prepared to carry this momentum to its transportation sector to meet the targets outlined in EO 246. 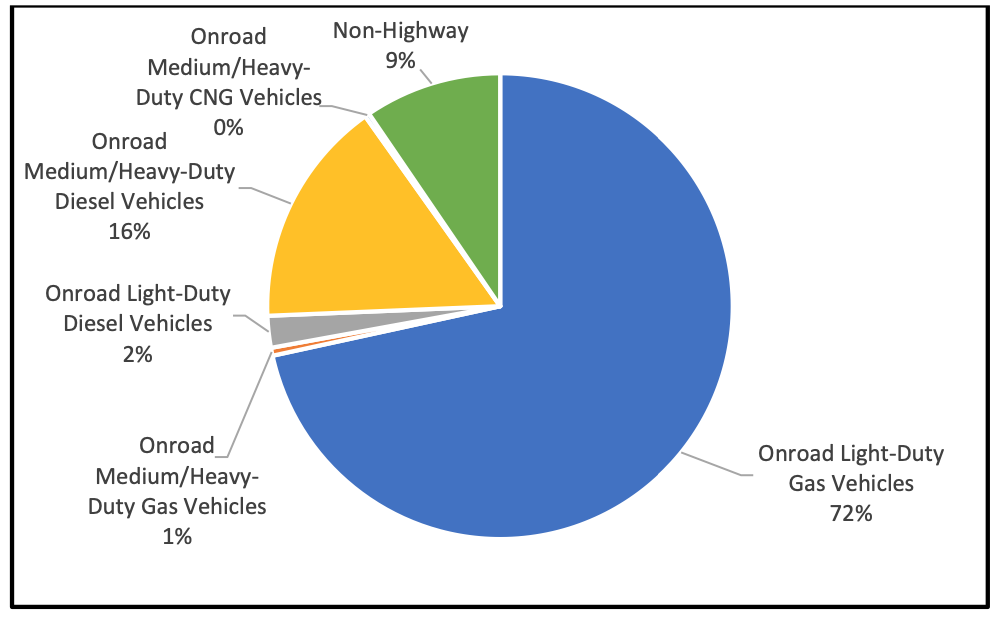 The creation of a clean transportation plan, proceeded by policy and regulatory action is instrumental to emission reductions in the transportation sector. Jen Weiss, Senior Advisor for Climate Change Policy at NC DOT is heading efforts to steer the development of the Clean Transportation Plan. She recently joined the agency after decades of experience in the clean energy space, from public and private sector work to non-profit engagement. With NC DOT, Weiss coordinates climate-related transportation activities across the agency, while also working closely with experts throughout the state to establish a roadmap to carbon reductions. As she said: “This is the time to be in transportation. It’s an exciting moment in our state’s clean energy transition and exactly where I want to be.”

With her lead, NC DOT is relying heavily on broad stakeholder engagement to produce a diverse and comprehensive Clean Transportation Plan. This planning process includes partnering with sister agencies, such as NC DEQ, to explore every avenue for decarbonization.

It’s important to note that the Clean Transportation Plan is all-encompassing of the transportation sector in the state. That includes within the agency’s own operations and amongst the population at large. Starting with an internal focus is critical, though, as the agency oversees and maintains the second largest number of roads in the nation behind Texas and operates the largest fleet of vehicles in the country. But beyond that, Jen notes that reducing emissions in the transportation sector is going to be an “all hands on-deck” approach. To emphasize this point further, Weiss shared that “everyone is invited to the table that is willing and able to participate and engage." This includes environmental organizations, local governments, transit agencies, environmental justice groups, tribal communities, low-to-moderate, and numerous other organizations and individuals. 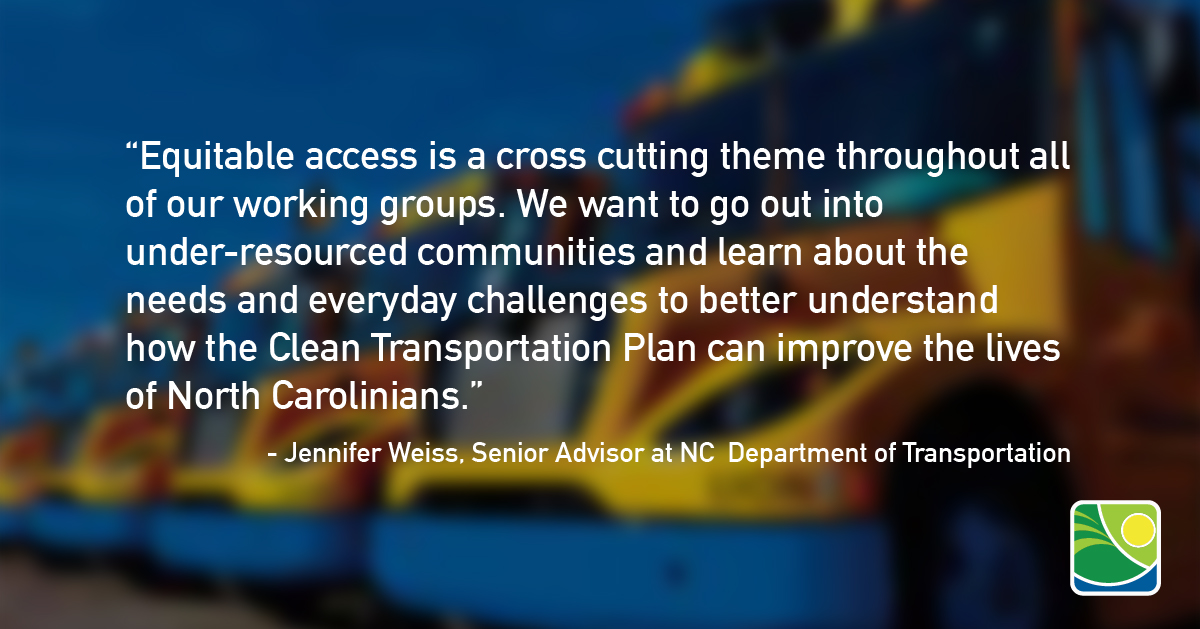 NC DOT is pursuing a collaborative process through the establishment of five working groups. These groups are designed to take deep dives within various sub-sectors of the transportation economy in NC to develop action plans and recommendations. The groups include the following:

Each of these working groups will be convening from May until September 30, 2022 and welcome additional participation. For an overall timeline of public information sessions and other key dates, see Figure 3. 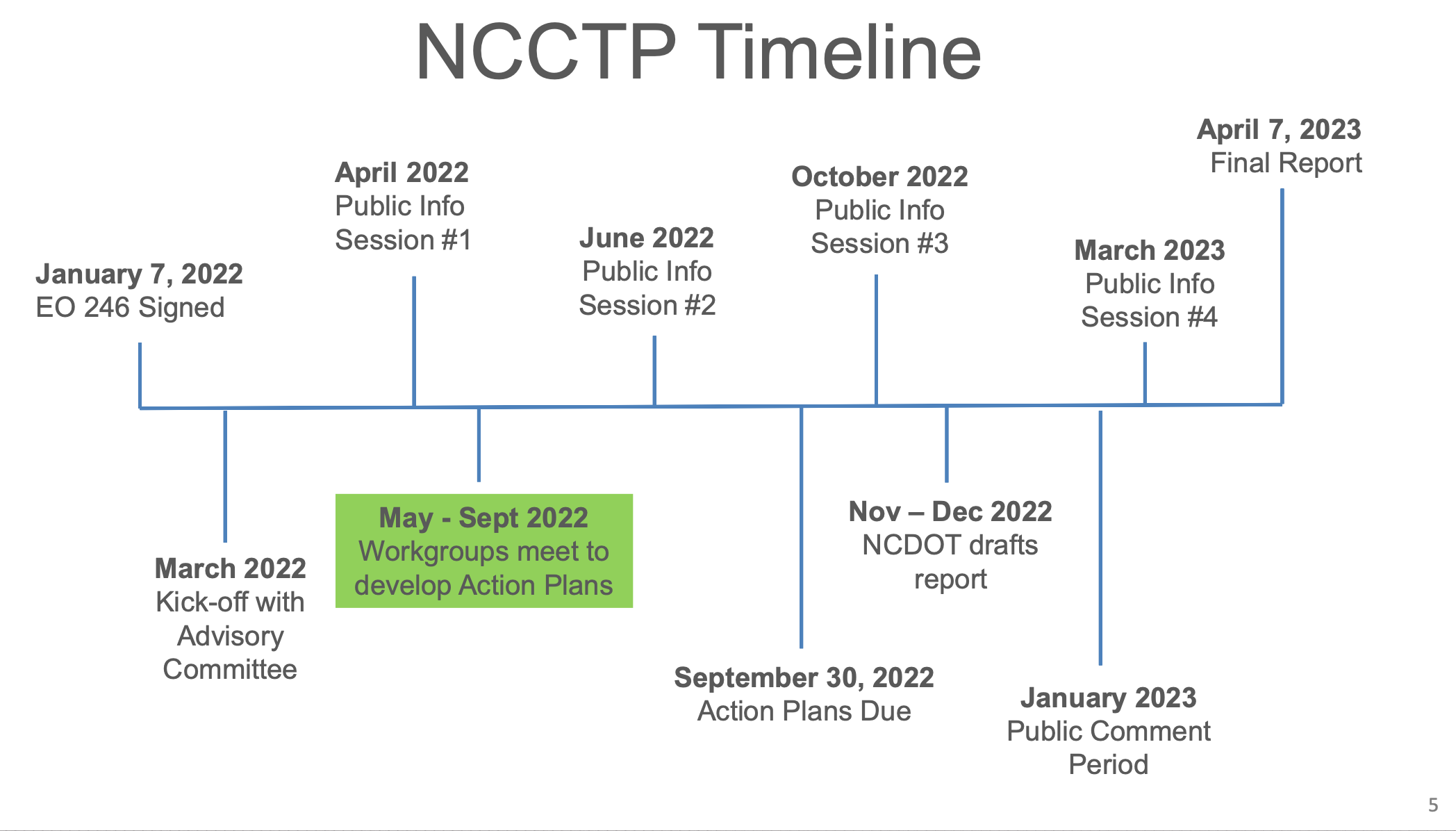 Besides the working groups, NC DOT plans to actively engage the community at large via public information sessions. To ensure an equitable transition, it’s important that individuals and communities from across the state are included in the clean transportation conversation. Throughout the process, NC DOT will also undergo specific outreach to communities that have been underrepresented or under-resourced. Further, NC DOT is also seeking external stakeholder engagement through an online survey.

Considerations for the Road Ahead

The scope of the Clean Transportation Plan is meant to be far-reaching to effectively address unique aspects of the transportation economy, from private to the public sectors and everything in between. Success will be defined by collaboration between utilities, advocates, municipalities, businesses, state government, individuals, and numerous other interested parties. The plan also contains six cross-cutting focus areas at the core of its design with a lens of social equity throughout, to remain comprehensive, as illustrated in Figure 4.

We have already seen significant strides in our clean energy transition, including the first electric school bus in NC’s history coming from the Eastern Band of the Cherokee Nation earlier this year. Further, the success of previous planning and stakeholder engagement activities from various sister agencies bode well for the road ahead. These include NC DEQ’s Clean Energy Plan and the Department of Air Quality’s on-going allotment of Volkswagen Settlement funding. NCSEA and its partners are confident in the direction we’re headed in as a state while NC DOT prepares its Clean Transportation Plan.

Action Plans from working groups are due September 30, 2022, while the first draft of the overall report is set to be turned in by NC DOT by November-December 2022. Head over to NC DOT’s website to stay informed about the process. Also, give the Squeaky Clean Energy Podcast’s Episode 70: Buckle Up! On the Road to Electrification with NC’s Clean Transportation Plan a listen to learn more!