This article features the story of Highland Brewing and its dedication to quality and sustainability for nearly three decades. Learn more about the role of clean energy in NC while enjoying a pint from Asheville’s first brewery at NCSEA’s Clean Energy in the Mountains event on May 19, 2022! 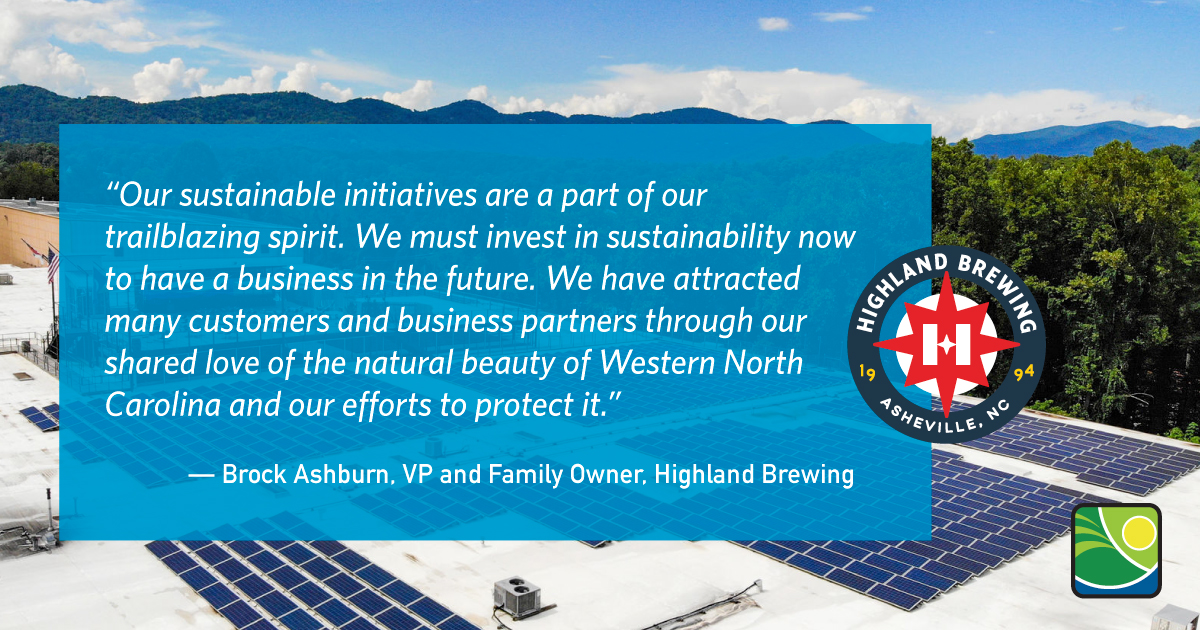 Craft Beer and Clean Energy in the Mountains

Highland Brewing exemplifies an operation whose direction has supported NC’s clean energy transition from the start. The brewery remains value-driven and continues to innovate in sustainable brewing because of its unwavering stance on quality.

Both Highland Brewing and its home state share a similar ethos relating to innovation and environmental stewardship. When the brewery opened its doors in the basement of a local pizzeria in 1994, the NC craft brewing industry and renewable energy scene were in their infancy. Nowadays, Highland is seen as an industry leader, regularly recognized nationally by the Brewer’s Association and press accolades, alongside the state it calls home often ranking atop the leaderboard in total solar installed. At the same time, North Carolina has also become a standard in world-renowned, trailblazing beer.

We are excited to celebrate these achievements, while discussing the recent developments in clean energy policy that will help to usher in the next generation of clean energy growth and development on May 19th at the Clean Energy in the Mountains event. Before that, though, let us look back in history to better appreciate and learn from Highland’s journey.

The Origins of Highland Brewing

Highland Brewing, located deep in the Blue Ridge mountains, was founded by Oscar Wong in the early 1990s. He had recently retired from a successful engineering career and was ready for the next adventure. After a local homebrewer approached him with the idea of starting a craft brewery, they decided to launch Asheville’s first brewery since Prohibition. Wong was naturally drawn to Asheville due to the culture of creativity and independent thinking. Because of its pioneering style and freewheeling spirit, brews like Gaelic Ale, Black Mocha Stout, and Oatmeal Porter quickly gained Highland Brewing a reputation.

In 2006, the brewery moved from its downtown basement home to the current location at the former Blue Ridge Motion Picture Studios in East Asheville. Today, the 40-acre property boasts a 180,000 sq. foot facility, 50-bbl brewhouse, along with a Taproom, Meadow venue, packaging hall, Event Center, and Rooftop Bar. Highland has also built walking trails, a disc golf course, and volleyball courts on the property to allow visitors to enjoy the western NC outdoor lifestyle. As a result, the brewery has become a destination in Asheville, seeing over 150,000 annual visitors to its grounds. In June 2021, Highland also returned to downtown Asheville as it opened a second location in the restored Art Deco food hall of S&W Market.

Now, both the brewery and its hometown stand as leaders in craft beer. Asheville has been named Beer City USA multiple years in a row because of its culture of innovative, industry leading beer. Riverbird Research of the Asheville Area Chamber of Commerce revealed the total economic contribution of Asheville-metro breweries in 2019 to be $935 million, one-third of the state's $1.7 billion total output for the brewery industry. Highland remains a trailblazer in award-winning beer because of its tradition of authenticity and reliability. The flagship brew, Gaelic Ale, was named North Carolina’s best beer and is still their best seller.

Although the market is vastly different than the mid-1990s, growing from a handful of breweries to over 8,000 breweries across the country today, Highland continues to evolve and innovate in the world of craft brewing. For instance, it has become the largest family-owned, female-led brewery native to the Southeast. Leah Wong, the founder’s daughter, now serves as the President and CEO of the company, along with her husband, Brock Ashburn, as the Vice President. With Leah Wong’s leadership, the brewery emerged as a regional leader, offering a lineup of 8 year-round, 4 seasonal, and 2 limited released beers, along with weekly small batch releases. She has also been named one of the Top 100 Most Influential Business Leaders four years running by Business North Carolina magazine’s Power 100. Oscar Wong is still active within the brewery and became the 34th recipient of the Brewer’s Association Recognition Award in 2020 for his lifetime commitment and impact on the craft beer movement.

Highland is an active and engaged member of the western NC community, as seen with the launch of its 2022 Pints with Purpose series. This initiative showcases five of the region’s most impactful nonprofits and benefits partners by donating the majority of proceeds to their causes. These local partners include the Southern Appalachian Highlands Conservancy, FoodBank, Asheville Humane Society, Helpmate, and the WNC Nature Center.

The ethos of reusing and recycling material was engrained in its culture from the very start when Oscar Wong procured and retrofitted old dairy equipment for the brewery in the early-1990s. In fact, that equipment still operates today as spent ingredient storage. During the selection process for the present-day facility, Highland decided to take the more costly but less impactful path of revamping an unmaintained building and piece of property to make it their own. This involved remediating a brownfield site and redeveloping the land, the latter of which is still very much underway. The brewery’s team is currently working to eliminate invasive species, construct effective stormwater management systems, and build hiking trails throughout the grounds.

Further, Highland distributes brewing ingredients it no longer needs, like spent grain, yeast, and used hops, to local farms as feed for cattle and livestock. These ingredients are high in nutrition and divert waste from the landfills. The reduce and reuse mantra runs deep at Highland, as evident by kegs used in light poles, repurposed shipping containers in its bars and administrative offices, and reclaimed pallet wood around the facility.

The brewery also started installing solar panels in late 2014 as part of its sustainability initiatives. As Leah Wong said in a 2015 interview with the Dogwood Alliance: “There are some tax benefits for installing solar. As a small business in the alcohol industry, we have challenges and pay plenty of taxes. When there are tax benefits that allow us to grow our business while we work toward sustainability, we are in.”

Today, Highland Brewing boasts a 324 kW DC solar array on its roof, the sixth largest array of solar panels owned by a craft brewery in the US and 22nd largest brewery-owned solar array in the world! The panels can fully power the brewery’s operations under peak conditions and even export excess energy back to the grid at certain times of the year. 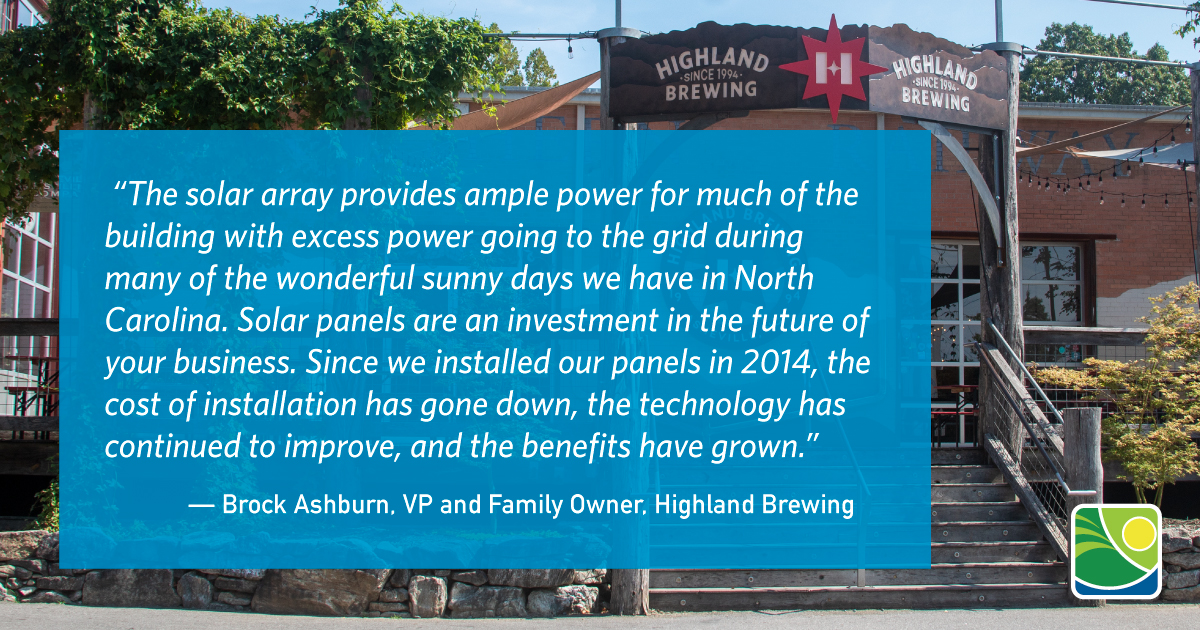 Along with upgrades to the property, Highland has invested significantly in processes and equipment to diminish the footprint and overhead costs of its daily operations.

One such measure included upgrading its circuits to 480V power across many parts of the campus, along with the renovated packaging hall. This reduced construction and energy costs, while resulting in less energy lost to heat in the form of current resistance. In addition, Highland also replaced outdated light fixtures across the 180,000 square foot facility with T5 fluorescent and LED light fixtures, many of which are motion activated.

Highland also completely replaced the original leaky and poorly insulated roof with 125,000 sq. ft. of white 60 mil Thermoplastic Polyolefin (TPO). This resulted in an immediate stabilization of internal temperatures and lower HVAC costs, while reflecting sunlight to minimize the urban heat island effect. Furthermore, Highland purchased two high-efficiency boilers to save energy while heating water, an essential and energy-intensive aspect of making beer. A fraction of the typical amount of natural gas is required compared to conventional boilers, and a closed-loop system helps them save energy.

The Path Forward for Clean Energy across NC

NCSEA is proud to tell the inspirational story of Highland Brewing and their commitment to producing craft beer in a sustainable fashion right here in our state. We believe that stories like this will continue to propel NC towards a successful clean energy future for all. The state has come a long way, though the road is far from over. Let us raise a glass to the hard work that has brought us here, while also recognizing the important efforts that lie ahead in our pursuit of decarbonization in North Carolina!